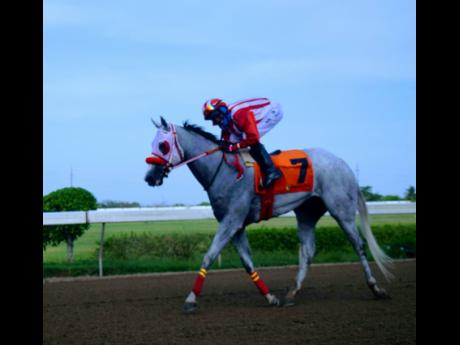 COURSE-specialist SALVATION has a great draw and suitable weight in Saturday’s 10th to avenge her only loss in five starts at five furlongs straight, suffered at the feet of KING ARTHUR on April 8, when she was terribly drawn in a 13-horse field and running for the first and only time in a tongue tie.

Now in receipt of 18lb from KING ARTHUR, who had benefited from stall 11 when clocking 57.0 on a fast track, the draw has flipped with the 2020 Jamaica Derby winner now at post-position three, which had bogged down SALVATION in April.

SALVATION is the best drawn of the lighter speed horses with ROJORN DI PILOT in mid-track at stall 10, whereas dangerous PATRIARCH breaks from gate two with 115lb. Speedy PATRIARCH should easily get away from the inner and could be the leader entering the main track to duel with ROJORN DI PILOT.

However, PATRIARCH has not been at his best since beating stablemate GOD OF LOVE in a driving finish off a near three-month lay-up on April 8. Last time out, PATRIARCH was badly burnt on the lead by MAHOGANY at five and a half furlongs and weakened out of contention, giving up third to SALVATION a furlong and a half out.

Drawn widest at stall 10, SALVATION should be the leader of the stand-side group with LABAN, DUKE, EAGLE ONE and STRANGER DANGER to her inner. The speedy grey enjoys running alongside the outer rail and should be travelling best with the weight and track bias in her favour, similar to her July 5 victory when she floored TREVOR’S CHOICE at the trip.

Jason DaCosta has stacked the event with three runners, hoping especially EAGLE ONE can keep the leaders busy for KING ARTHUR to pounce. However, EAGLE ONE is a middle-distance pacer, who will have trouble matching the course specialists’ sub-23.0 opening fractions, followed by possibly a sub-45.0 four-furlong split.

The closing sprinters, LABAN and DUKE, will also have their work cut out to get on terms with their quicker rivals. LABAN is light at 104lb but isn’t a great starter and could prove a handful for Samantha Fletcher whereas DUKE is struggling to regain his pre-summer form.