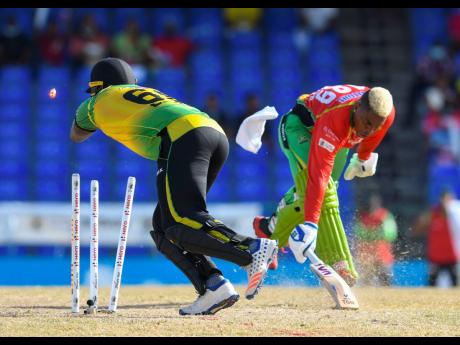 The Tallawahs were not able to chase down the 170 runs needed to win, and in the end, the Jamaican franchise was dismissed for 123 runs in 19.1 overs.

The result means the Tallawahs remain on eight points from nine games in fifth position with only today’s return encounter against the Warriors to come at 1:30 p.m. Jamaica time.

The Tallawahs with a healthy net run rate of 0.216 still have a chance of making it into the final four, however, they will have to beat the Warriors today.

In a game that saw both the Tallawahs and Warriors squaring off for the first time, the Warriors opted to take the first strike after winning the toss and posting a challenging total of 169 for six, thanks to a brilliant unbeaten 75 from captain and player of the match Nicholas Pooran.

The left-hander finally came good with the willow, as he smashed four fours and seven sixes in his 39-ball knock.

Another left-hander, Shimron Hetmyer also weighed in with 23 against two wickets for Andre Russell.

The run chase proved difficult for the Tallawahs, who lost wickets at crucial intervals in the middle period of their innings, including two wickets with the score on 98 and 114.

Rookie opener Kirk McKenzie was the surprise top scorer with 28 runs from 26 balls with two fours and a six with Shamarh Brooks chipping in with 21 from 20 balls.

Jamaican seamer Odean Smith was the pick of the bowlers for the Warriors bagging three wickets for 21 runs while left-arm spinner GudakeshMotie picked up three for 25.