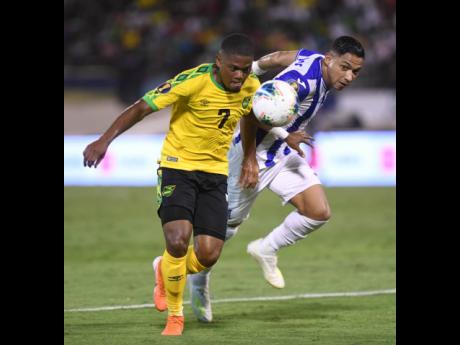 File
Jamaica’s Leon Bailey (left) gets to the ball before Honduran defender Emilio Izaguirre during a Concacaf Gold Cup encounter at the National Stadium in 2019.

THOUGH HE came out on the losing end, Jamaica’s Leon Bailey has made a bright start to his career at Aston Villa Football Club. His skill, pace and industry have impressed football coach and analyst, Andrew Price, who believes Bailey will wreak havoc in the English Premier League (EPL).

Villa lost 0-3 to Chelsea, the 2021 European Champions League winners, with Bailey on as a second-half substitute, on September 11.

Bailey moved to Aston Villa from German club Bayer Leverkusen as Villa, the seven-time English champion team, rebuilt its squad after the departure of Jack Grealish to Manchester City. The Chelsea game was the 24-year-old Jamaican’s second taste of Premier League football, having provided an assist in his first game against Watford, which Villa lost 2-3.

“I believe the coach is slowly trying to make him get accustomed to the pace of the English Premier League. He had a recent injury and I believe that he is just slowly getting him into shape, so that he can really put in a good impact in his first season for Aston Villa,” Price surmised.

Bailey played wide on the right, adding pace to the Villa attack and racing back to help in defence as needed.

“He likes to cut in on his favoured left foot,” Price recalled, “and we know he can be very explosive with that educated left foot that he has. He can get off some shots, so I think he’ll be most effective for them playing on that right flank.”

Asked whether Bailey will adjust quickly to top-flight English football, Price offered: “The pace of the English Premier League is very similar, a little faster. It’s a little more physical and I think that with the physicality that the Bundesliga has, Leon will be able to adjust very quickly in the EPL.”

A coach of renown himself, Price sees a bright future ahead for Bailey in England.

“I expect him to take the English league by storm and I don’t think Aston Villa will be the final stop if he does as well as I expect him to do. He could move to a top four club in the not-too-distant future,” Price predicted.

Nevertheless, he tabled a note of caution.

“This is his adjustment year. If he can get 10 goals for Aston Villa this season, I think he would have done well in his first season,” the analyst proposed.