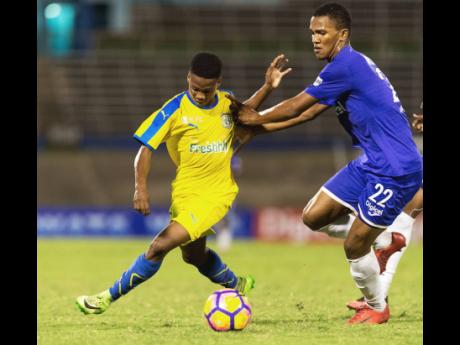 File
In the match-up of champions, Scott McLeod (right) of Kingston College defends against Clarendon College’s Lamar Walker during the ISSA Olivier Shield showdown at the National Stadium in Kingston on Saturday, December 8, 2018.

Jamaica Football Federation (JFF) General Secretary Dalton Wint says that the administration is willing to share its health and safety protocols for the Jamaica Premier League (JPL) with ISSA for a return of schoolboy football. ISSA set a tentative...

Jamaica Football Federation (JFF) General Secretary Dalton Wint says that the administration is willing to share its health and safety protocols for the Jamaica Premier League (JPL) with ISSA for a return of schoolboy football.

ISSA set a tentative October 9th date for the return of the urban and rural area secondary school football competitions. However, President Keith Wellington said in a Gleaner interview on August 30 that the recent surge in COVID-19 cases could cause a setback.

Wint says that JFF President Michael Ricketts will meet with Wellington this week to discuss a start to the season.

“Anything that we can do to assist in the restart of schoolboy football, we will be definitely be lending a hand towards that,” Wint told The Gleaner. “We are looking to share our protocols with ISSA and whatever they choose to incorporate, it would be something that we would support.”

Among the protocols which guaranteed the start of the JPL were centralised venues; the restricted playing format to just one round; and additional sanitisation measures.

However, Wellington has said that he would be encouraging principals to have their student-athletes vaccinated for sports to return.

Education Minister Fayval Williams said in an interview with the Jamaica Information Service on Friday that over 40,000 students have received their first dose of the Pfizer vaccine and that the Ministry is targeting a vaccination take-up of at least 65 per cent for face-to-face classes to resume.

Jamaica College head coach Davion Ferguson says that continued vaccination among the school population is critical regarding the resumption of schoolboy football this year and warns of the consequences if another year goes by without the competitions.

“That will be important for me, personally, for the competition to happen,” Ferguson said. “We have to look at the implications of going another year without schoolboy football. It’s far-reaching. Last year I had extreme difficulty moving players on to other opportunities, scholarships and otherwise, because we never had the competition and the fallout is far and wide in terms of national programmes, our own development programme, the mental state of our kids.”

The Olivier Shield final in December 2019 was the last schoolboy football game to be played before the pandemic forced the cancellation of the 2020 season. Wint has also echoed sentiments of how critical the current vaccination drive for students is for the competitions to return.

“In sport, it is always important to take care of your athletes and one such vein to protect the athletes is getting vaccinated,” Wint said.

The Gleaner understands that discussions have been ongoing with ISSA and the Ministry of Sport regarding starting the season. Ferguson says that any proposals on competition structure would be dependent on the number of schools able to participate.