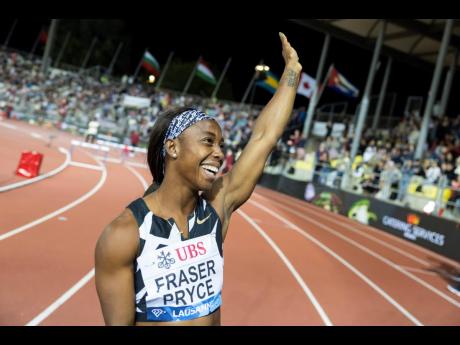 Tokyo 2020 100m metres silver medallist Shelly-Ann Fraser-Pryce continued her impressive form in the event, after clocking a new meet record of 10.78 seconds to win at the Gala Dei Castelli meet in Switzerland yesterday, as she brought the curtain down on an exceptional campaign.

Fraser-Pryce, who was one of two Jamaicans to win at the meet, easily got the better of the Swiss pair of Mujinga Kambundji, 10.99 and Ajla Del Ponte 11.11 seconds, as Jamaican Natasha Morrison finished fourth in 11.17 seconds.

Meanwhile, Olympic Games 800m finalist Natoya Goule was the other Jamaican winner at the meet, after taking top honours in 1:58 20 minutes, to get the better of the United States’ Chanelle Pryce, who was second in 1:59.75 minutes. It was Goule’s second win in her last three races.

There was also success for triple jump standout Shanieka Ricketts at the World Athletics Continental Tour in Zagreb, Croatia.

Ricketts, the World Championships silver medal winner, won the event with a mark of 14.77 metres and in the process erased the old meet record of 14.58 metres, as Neja Filipic of Slovania took second place with 14.37 metres.

Jackson clocked 22.30 seconds in the women’s 200 metres, which was won by Namibia’s 18-year-old Olympic silver medallist Christine Mboma, who clocked a meet record of 22.04 seconds.

Janieve Russell, 55.45 seconds, the Olympic finalist, was third in the women’s 400m hurdles, while there was also a third-place finish for Shadae Lawrence in the women’s discus, with a distance of 60.80 metres.