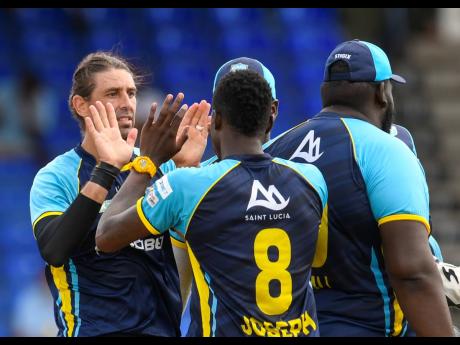 Choosing to bat first in the first semi-final at Warner Park, Kings stormed to an imposing 205 for four off their 20 overs with the left-handed Deyal producing an audacious 78 off 44 balls at number three.

Tim David belted an unbeaten 38 off just 17 balls, in-form Roston Chase carved out 36 off 21 deliveries, while Wiese also proved handy with the bat with a 21-ball unbeaten 34.

In reply, the game was in the balance at 159 for four but seamer Wiese got the key wicket of captain Kieron Pollard for 26 in the 16th over, to grab three of the last six wickets to fall for 25 runs and end with spectacular figures of five for 39.

Only last weekend, the South African Wiese picked up five for 25 against Barbados Royals in Kings’ penultimate preliminary game.

“In this game you bowl well and you don’t get the reward and sometimes everybody else bowls well and you’re the guy who picks up the wickets and that’s what it was like today.

“Everybody else bowled well and they put the pressure on the batters and they had to go off at me and I suppose I got lucky with one or two and in the end it just worked out.”

Pollard, who presided over TKR’s unbeaten campaign last year, said Kings deserved praise for the aggressive manner in which they approached the contest.

“They came out and they were positive from the toss. You’ve got to give them credit,” Pollard said afterwards.

“I think they played well, they were the better team today and sometimes when you lose a game like this, you have to give credit to the opposition. You can’t win all.

Andre Fletcher, standing in again for the injured Faf du Plessis, said reaching the final had been the first objective but stressed Kings were now focussed on their first-ever title.

“It’s a great feeling to know that last year we got to the finals and we didn’t get over the line but this year we wanted to get back there,” Fletcher pointed out.

“We didn’t want to make it look like it was a fluke and trust me, in the dressing room we are pumped up and everyone is looking forward to the final. It’s not over yet but we really want to get over that line.”

The first half of the innings belonged to Deyal, the Trinidadian thumping five fours and half-dozen sixes in a 73-run, second wicket stand off 40 deliveries with Fletcher (4) before adding 54 off 36 balls for the third wicket with Chase, who exuded class in striking a couple of fours and sixes.

Deyal and Chase perished in successive overs to leave Kings on 130 for four in the 15th over but David and Wiese each struck a four and four sixes, combining in a destructive unbroken fifth wicket stand of 75 off 34 balls as Kings plundered 72 off the last five overs.

Needing to score at nearly 10-1/2 runs per over, TKR lost Lendl Simmons (4) in the first over with the score on six but Narine and Munro transferred the pressure back on Kings in a fiery 71-run, second wicket stand off 38 deliveries.

However, Wiese removed both in the eighth over – the second of his spell – to haul Kings back into the contest before Bravo added 41 for the fourth wicket with Ramdin and a further 38 for the fifth wicket with Pollard, to set up a grand-stand finish.

Pollard was beginning to tee off with three sixes in a 13-ball cameo when he skied a short ball from Wiese for wicketkeeper Fletcher to snaffle a single catch, as Kings scented victory.