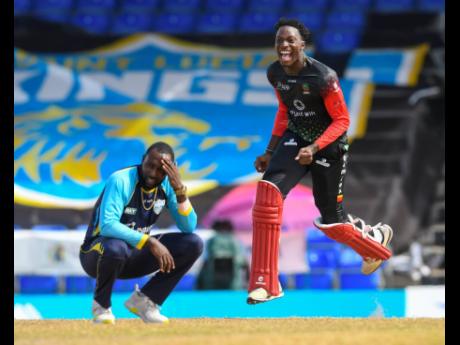 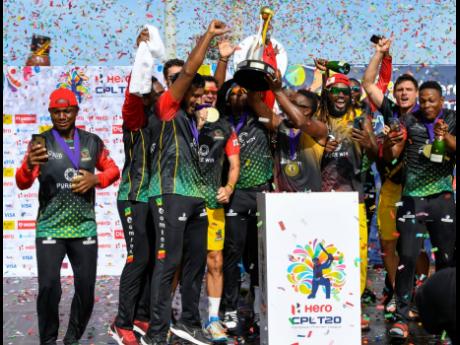 Dominic Drakes firmly etched his name in Caribbean Premier League history here yesterday when he held his nerve under pressure to slam a last-ditch cameo and propel St Kitts and Nevis Patriots to their first-ever title in a sensational last-ball win.

Chasing 160 for victory at Warner Park, the hosts reached their target when the 23-year-old Drakes scampered a desperate single to short fine leg, to complete a three-wicket victory as repeat finalists St Lucia Kings suffered heartbreak for a second year running.

With nine needed from the last over sent down by out-of-favour West Indies seamer Kesrick Williams, Drakes scrambled a single off the first ball before Naseen Shah hit a low full toss to mid-wicket for another run.

Drakes was kept scoreless off the third ball – a well directed yorker – but sprinted a couple off the fourth before belting the fifth delivery to the cover boundary to tie the scores.

With a possible superover beckoning, Drakes squeezed a leg-stump yorker fine, and though the fielder was on to the ball quickly, it was not enough to prevent the run.

The left-handed Drakes, better known for his seam bowling, top-scored with an unbeaten 48 off 24 deliveries, smashing three fours and three sixes, while Joshua Da Silva chipped in with 37 off 32 balls and Sherfane Rutherford, 25 off 22 deliveries.

“It’s hard to explain [my emotions],” Drakes, who was mobbed by the entire squad on the pitch after hitting the winning run, said. “I’ve been playing for St Kitts for three years, and it’s the first chance really to play the whole competition, and I did well.

“But it’s just not me. It’s Ruthers (Rutherford), Bravo (Dwayne), Solj (Sheldon Cottrell) – everyone in the team. It’s an amazing feeling.

“I just thought it was a team effort, and I had to play my part in order for us to win.”

Promoted to number six in the order, Drakes arrived at the crease with Patriots struggling at 75 for four in the 11th over and revived the run chase, adding 20 for the fifth wicket with Bravo (8) and a crucial 44 for the sixth wicket with Fabien Allen (20).

Allen holed out to mid-wicket off Wahab Riaz (2-36) at the start of the penultimate over with 21 required for victory, but Drakes cleared the ropes with the next delivery and crashed the fifth ball to the boundary as the over leaked 12 runs.

“That guy has been a champion for us,” Patriots head coach Simon Helmot said.

“He’s taken the most amount of wickets – he’s filled up that spot nicely. We went a batter short today, but he came in earlier than usual.

“But he’s a great fellow. He’s the future of West Indies cricket, and I look forward to watching him not only in CPL cricket, but in cricket for West Indies.”

Choosing to bat first, Kings rallied to 159 for seven with both Rahkeem Cornwall and Man-of-the-Series Roston Chase hitting 43 while Keemo Paul came late to blast 39 off 21 deliveries.

They were slipping at 32 for two in the fifth over before Chase and Cornwall combined in a 44-run, third-wicket stand to repair the damage.

Cornwall belted five fours and two sixes off 32 deliveries while Chase faced 40 balls and counted four fours and a couple of sixes before three wickets tumbled for 24 runs to leave the innings stalling at 100 for five in the 15th over.

Chase added a further 28 with Paul, who then took charge at the back end with five robust sixes to get Kings beyond the 150-run mark.

Needing to score at eight an over, Patriots suffered a disastrous start when the T20 World Cup-bound veteran Chris Gayle was bowled by off-spinner Chase without scoring, trying to cut the fourth delivery of the innings with a single run on the board.

And the in-form Evin Lewis followed for six in the fourth over, pulling Wahab to Chase at mid-wicket at 26 for two.

Da Silva arrived to hit five fours, and Rutherford, a four and two sixes, the pair posting 45 for the third before both perished in the space of seven balls with four runs added to leave Patriots languishing at 75 for four.

Drakes, who finished the tournament with 16 wickets, then entered to produce his fireworks with the bat and end Patriots’ protracted title drought.

J Royal not out 0

Did not bat: A Joseph, K Williams

Naseem Shah not out 1