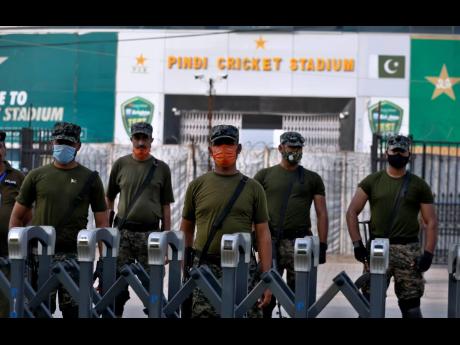 New Zealand (NZ) abandoned their cricket tour of Pakistan yesterday because they are wary of being attacked outside Rawalpindi Stadium, according to the Pakistan government.

New Zealand Cricket (NZC) declined to reveal the nature of the security alert from its own government that prompted the sudden decision to cancel the tour moments before the scheduled start of the One-Day International(ODI) series in Rawalpindi. Both teams had stayed at their hotel.

Khan, who is on a government visit of Tajikistan, informed Ardern “we have one of the best intelligence systems in the world and that no security threat of any kind exists for the visiting team”.

Ahmed said he had no information about a security threat against the New Zealanders and backed Khan at a news conference.

“He told her that the law and order situation is the best in our country and we give a guarantee that there is no security problem here, there is no security threat,” Ahmed said. “But the prime minister of New Zealand said that the issue is not the threat but we have such information that when the team goes out it can come under some attack, so they have unilaterally cancelled their tour.”

The security concern has the Pakistan hosts mystified.

The Pakistan Cricket Board (PCB) said together with the Pakistan government they “made foolproof security arrangements for all visiting teams. We have assured the New Zealand Cricket of the same.”

“Crazy day it has been! Feel so sorry for the fans and our players,” Raja tweeted. “Walking out of the tour by taking a unilateral approach on a security threat is very frustrating. Especially when it’s not shared!! Which world is NZ living in?? NZ will hear us at ICC.”

NZC said on its website: “Following an escalation in the New Zealand government threat levels for Pakistan and advice from NZC security advisers on the ground, it has been decided the Black Caps will not continue with the tour. Arrangements are now being made for the team’s departure.”

New Zealand’s first visit to Pakistan in 18 years was to feature three ODIs in Rawalpindi and five Twenty20s in Lahore. Both cities and the security arrangements were cleared by NZC’s security team last month.

Ahmed said Pakistan allowed hosting the games without spectators, but New Zealand rejected the offer. Pakistan, therefore, allowed the stadiums in Rawalpindi and Lahore to be at 25 per cent crowd capacity because of the pandemic. But Pindi Stadium was not opened yesterday to spectators, as New Zealand decided to abandon the tour.