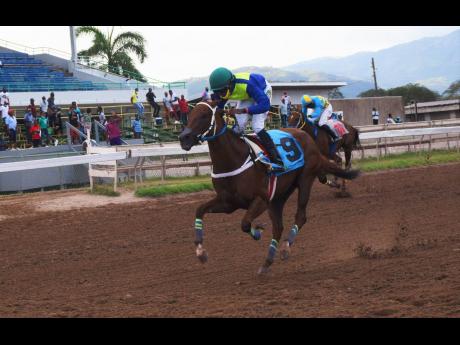 SOLID APPROACH was forced to chase the pace too early last time out, her second run off a four-month lay-up, leaving her flat-footed against race-fit LABAN at six furlongs. The United States-bred mare has really trained well for her return in Wednesday’s overnight allowance at six furlongs, which looks set to be a run-on sprinter’s paradise.

The Anthony Nunes-Jason DaCosta stakes war should have the event playing into SOLID APPROACH’s stretch-running style, with her being the quickest of the closers in the 12-horse line-up.

DaCosta’s MAKEUPARTIST was brought back to earth with a loud thud on last, a gate-to-wire, four-race win streak halted on her first run among overnight allowance horses. Though she returned lame, MAKEUPARTIST was bouncing happily at exercise two weeks later and has trained beautifully for a post-to-post bid.

However, Nunes, whose rear-view mirror has been telling him DaCosta is closer than he appears, starting last weekend with an approximate $3.4-million lead over his rival, will have a lot to say with GO DEH GIRL, though the importee is no outright sprinter.

MAKEUPARTIST needs an unmolested lead to answer any questions posed by the closers in the stretch run, but that’s a luxury GO DEH GIRL won’t afford her. GO DEH GIRL showed enough when chasing VICTORY TURN on last to suggest she is capable of keeping MAKEUPARTIST honest, which will be at her expense when SOLID APPROACH comes calling.

SOLID APPROACH will enjoy the tête-à-tête and should b kept just off the leaders by Omar Walker, unlike last time out when she was forced to go in chase of lone-speed LABAN, who had been pretty active while she was on a four-month break.

Christopher Pearson seemingly has SOLID APPROACH in tip-top shape, watching her clock 1:01.0 for five furlongs round on Tuesday, a telling speed gallop for a run-on sprinter drawn away from the inner, giving Walker a bird’s-eye view of the field.