Crocs can compete with the best – Edie 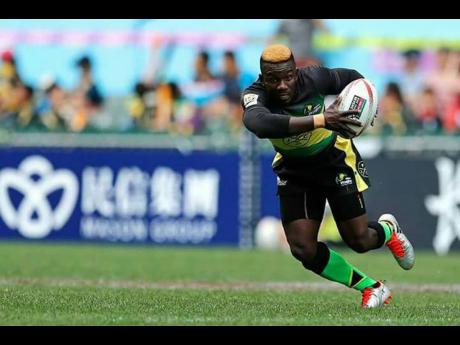 JAMAICA RUGBY Sevens’ co-captain Oshane Edie believes that with better support and resources Jamaica could compete with the world’s best at rugby sevens.

The Jamaica Crocs created their own bit of history at the HSBC World Rugby Sevens series in Vancouver, Canada, on the weekend, when they defeated Chile 10-5 for the first win at the elite level.

“These are fully professional teams and we are just trying to match them. A big problem for us, though, is that we do not have the resources or sponsorship to train,” he said.

Edie also scored the team’s first try at this level of competition. His effort tied the scores at 5-5, which sent the game into overtime, and Jamaica scored again in extra time to give the ‘Reggae Crocs’ their historic result.

“It would help a lot to have a one-week training camp before competitions like these, because even at this level we are able to compete and match these boys,” said Edie, who represents the St Andrew Quakes.

“So, just imagine if we had the resources to put on a two-week or even a one-week training camp before tournaments like these,” he reiterated.

Continuing, the Crocs’ co-captain noted that even simple resources such as video analysis equipment is not available to the team. Nevertheless, he insists that the disparity in the quality between them and the elite teams is not much.

“Even though the odds are against us in terms of talent and effort, we are matching these big teams. Those (pro) players train almost seven days of the week, while we will only train on Saturdays; and to be able to come here and win a game is a great accomplishment,” underlined Edie.

“So the gap is not that wide. If our resources improve, we can definitely compete at the highest level,” he added.

In their other Pool B games, Jamaica lost 24-5 to Great Britain, 50-0 to Ireland and 62-0 against Hong Kong on Saturday.

However, in the ninth-place semi-final play-offs on Sunday, the Crocs stopped Chile 10-5 to claim their first victory.

Although they lost the ninth-place decider 66-0 to Germany, Edie said getting the result over Chile was a remarkable accomplishment.

“The competition was rough, but we found ourselves competing with them. We have a very good coach and based on our tactics, our playing culture and system improved,” he analysed.

“The entire weekend was a struggle. We were playing against big boys and getting big scores, and our bodies were being smashed left and right,” he related. “I came off the bench (in the Chile match) with a small knee injury, and the game was pretty tight. But coming off the bench and scoring the equaliser, and making that impact, let the guys lift their heads up a little bit higher and started to believe more that we could pull it off.

“And to get the win against Chile for the first time is a really awesome feeling,” he said.

The team will compete in the second leg of the series, which will be held in Edmonton, Canada, this weekend.