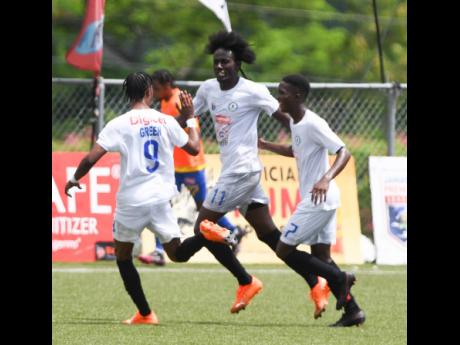 In their past Jamaica Premier League (JPL) two-legged play-off ties, fortune has not favoured Harbour View.

Now facing a two-goal deficit, the ‘Stars of the East’s’ path to the semi-finals will require a bit of history when they face Mount Pleasant in the return leg of their JPL quarter-final at the UWI-JFF-Captain Horace Burrell Centre of Excellence at 2:30 p.m. today.

Tivoli Gardens and Vere United will take the 0-0 scoreline from the first leg into the opening match, which gets underway at noon.

Mount Pleasant currently hold the advantage by way of their 3-1 win in the first leg on Saturday, a match that saw Habour View head coach Ludlow Bernard sent off at half-time.

Harbour View’s recent play-off history has not been positive. In their last two play-off appearances using the two-legged format, they have not won the first leg and have proceeded to lose the second.

A DOSE OF CONFIDENCE

However, Harbour View’s assistant coach Sean Fraser believes that Tyrese Williams’ late goal on Saturday provides a lifeline and dose of confidence for his team to buck the trend of play-off exits.

“A two-goal lead is always very dangerous but a three-goal lead is like a mountain to climb. So for us, it’s a good lifeline and we are positive (we can overturn the deficit),” Fraser said.

A lack of good finishing was one of the main problems Fraser pointed to from their first-leg game but was confident that they will be able to make the proper adjustments as they fight to continue their title quest.

“We were creating chances on top of chances but we just couldn’t score. To score a goal, you have to put heart and determination and effort into it. You have to get in the right positions. We got the goal which is good and we are going to (come back),” Fraser said.

Meanwhile, Mount Pleasant will look to close out their opponents and secure a second trip to the semi-finals in three seasons.

With the absence of last year’s cancelled campaign, Mount Pleasant made it to the final four in their first season in the top flight in 2019.

Despite being pleased with his team’s attacking display in the first leg, technical director Walter Downes is wary of how complicated the return leg can get thanks to Harbour View’s late goal.

“It would have been great to come off with a clean sheet. We lost our shape and we allowed that guy (Williams) that space to hit the ball. It was disappointing in my view but it doesn’t take away from the performance,” Downes said before promising that his team will continue their attacking game-plan despite their advantage.