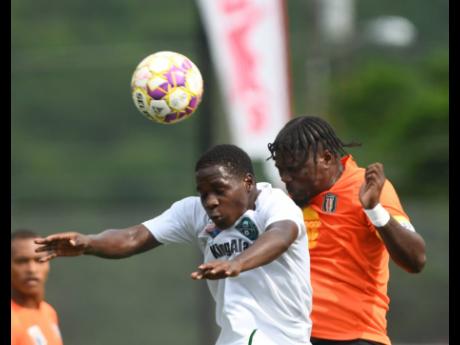 Out of the six play-off teams in this season’s Jamaica Premier League (JPL), Vere United have had the best defensive record heading into the postseason.

They will be banking on that while hoping that the frontline can do enough to extend their inaugural play-off run with a spot in the semi-finals, when they meet Tivoli Gardens in their second-leg quarter-final at the UWI-JFF-Captain Horace Burrell Centre of Excellence at noon today.

While Mount Pleasant will take a 3-1 advantage in their quarter-final return against Harbour View in the other match which starts at 2:30 p.m., the Vere – Tivoli Gardens match still anybody’s game, after both teams finished 0-0 in the first leg on Saturday.

Vere United will be mindful of the two golden opportunities that they squandered in the second half as they look to continue their push to the semi-finals.

In the regular season, goals have come at a premium for Vere United, who enter their first postseason with a mere seven, the lowest among the six play-off teams.

Defensively they have kept it tight at the back, conceding seven goals from 10 games, boasting the best record this season.

It is one of the marks that head coach Donovan Duckie has been proud of in his short time at the club.

“This is something solid to build on for the long-term project, but in the interim we have to continue to maintain our composure, use that as motivation and see if we can get some goals going forward,” Duckie said.

Both teams had their fair share of opportunities in the first leg and Duckie expects another tactical duel against his west Kingston rivals.

“We have a positive mindset and we still have to maintain a positive outlook going into the second leg,” Duckie said.

Veteran Tivoli Gardens midfielder Jermaine Johnson knows all too well the difficulties he and his teammates will face as they try to penetrate Vere’s defences.

“Vere is a good team. They have a coach that knows how to play defence and it is going to be really hard for us to try to outclass them in that area,” Johnson said. “But I think that we have the players to go out there and try to get the job done because we have a good firing squad upfront. So we hope that everything comes up right for us.”

Tivoli will be relying on midfielders Devroy Greay and Horatio Morgan, the team’s leading goalscorers this season with four and three, respectively, for the inspiration up front.

The winner will face Cavalier SC in the semi-finals.