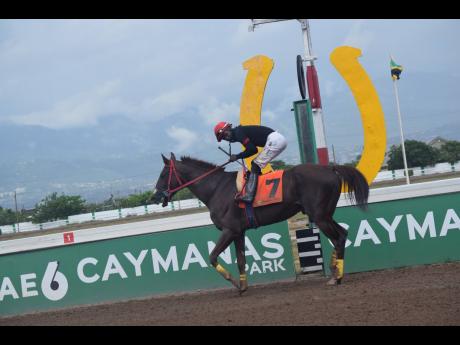 Anthony Minott
Sentient, ridden by Robert Halledeen, wins the seventh race, over six and a half furlongs at Caymanas Park in St Catherine on Saturday, August 14.

KING ARTHUR might have conquered rivals out of the mile chute with topweight in last month’s She’s a Maneater Trophy. However, he hasn’t won a route race since revelling in the mud to outfinish NIPSTER in last year’s Jamaica Derby, exposing a chink in his armour against Gary Subratie’s two-turn specialists, CALCULUS and CRIMSON, as well as their stablemate, SENTIENT, in Saturday’s Menudo at 10 furlongs.

Burdened with topweight 126lb, KING ARTHUR faces a tough task to lug the big impost around the park in an event with fast and furious gear changes expected from the likes of EROY and DOUBLE CROWN, running at 114 and 109lb, respectively.

Renowned for his sweeping moves from three furlongs out when contesting chute races, KING ARTHUR twice buckled on the route course this season when asked to get into the pace too early against two-turn specialists.

Though his July 31 run at nine furlongs and 25 yards can be forgiven as his worst-ever outing, finishing 19 lengths behind CRIMSON, HOVER CRAFT and NIPSTER, KING ARTHUR’s Achilles’ heel at the distance had already reared its head on June 5 when beaten into fourth by ONEOFAKIND, CRIMSON, and HOVER CRAFT, even with the handicaps in his favour.

KING ARTHUR having to give up 14lb to early running EROY, who clocked the fastest time at the trip this season, 1:56.2, plus DOUBLE CROWN, who led him for six furlongs in the She’s A Maneater, should set up the event for Gary Subratie’s trio of closers – SENTIENT, CRIMSON, and CALCULUS.

Whereas CRIMSON is the classical collapsing-pace closer and three-year-old CALCULUS is wetting his beak for the first time in top-class company, SENTIENT appears the most dangerous of the stablemates after being boxed in when beaten by KING ARTHUR in the She’s A Maneater.

Closing from off the pace with 124lb, SENTIENT got caught down along the rail, behind DOUBLE CROWN being hemmed in by KING ARTHUR inside the last furlong, a space Anthony Thomas kept closed to the wire for a three-quarter length win.

Though he is no specialist at the distance, SENTIENT is an effective stalker running five pounds lighter than KING ARTHUR, who is bound to make his move first, going after EROY and DOUBLE CROWN, neither of whom he can allow to slip away leaving the three-pole.

CRIMSON will always be dangerous from off the pace, and CALCULUS showed his two-turn pedigree with victories in the St Leger and derby. However, adding eight pounds to retain Shane Ellis might not have been the best move for his first run among the big boys.