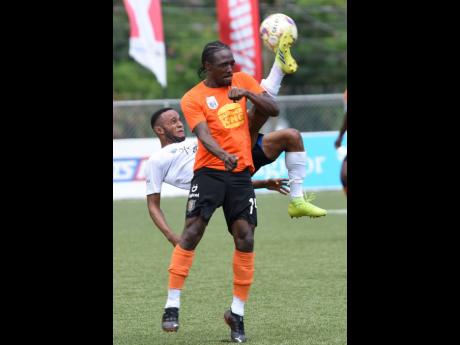 Cavalier seem to be developing the habit of leaving it late to win Jamaica Premier League (JPL) games.

Two weeks after Kyle Ming’s 84th-minute winner sent them into the semi-finals, it was second-half substitute Collin Anderson that produced another late winner, as his 85th-minute effort was enough to give them a 1-0 win over Tivoli Gardens in their first-leg semi-final game at the UWI-JFF-Captain Horace Burrell Centre of Excellence yesterday.

Tivoli, on the back of short rest from their quarter-final series win against Vere United, did look threatening in the second half, putting pressure on a Cavalier team that had the luxury of a two-week break.

However, Cavalier’s technical director Rudolph Speid said that the speed in their attack makes them a constant danger in the final 15 minutes of games, particularly with Anderson.

Anderson, who was a member of Calabar’s track team, showed his speed, latching on to a pass after he was put through on goal by Nickashe Murray before rounding Tivoli Gardens goalkeeper Kewong Watkins and slotting home into an empty net.

“Collin Anderson is the fastest player in the Premier League. It was a secret, but now people know. We knew that with tired legs, him coming on was going to cause a lot of problems,” Speid said.

“Over the years, Cavalier were always a good counter-attacking team, we haven’t lost that, but we developed our possession game over the last season and when we see these opportunities, we can take them.”

Meanwhile, Tivoli Gardens’ head coach Philip Williams did not blame his team’s lack of rest for the lapse in concentration.

“At the point when Cavalier scored, we had the upper hand, we were running. It was just unfortunate that we didn’t have enough numbers behind the ball on that counter-attack,” Williams said.

The one-goal deficit for the West Kingston club will now have added complications as Tivoli will be without Watkins for the second leg on Wednesday, as he was given a red card after the game for allegedly kicking a Cavalier player.

While Williams said that he did not see the incident, he was confident that backup Nicholas Clarke will be up to the task in the next leg.

“Players need to maintain their discipline no matter what the situation is. But we have a very balanced replacement in Clarke and we are very confident in all the goalkeepers we have at Tivoli Gardens,” Williams said.

Speid admitted that the slim lead does not give him much comfort heading into the return leg as his team hunts its first title since 1981.

“It is one of the worst leads you could ever have because if they score one, then people start to panic,” Speid said.