SDC T20 pulls up stumps due to curfew orders 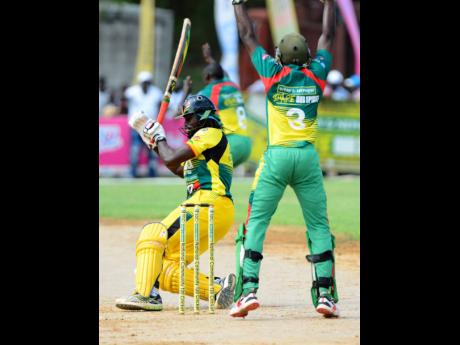 File
Myron Wilson (left) from Orange Hill, falls to the ground as he was trapped LBW in the SDC Community T20 cricket final against Gayle. The final was played at the Naranda Sports Complex in Discovery Bay, St Ann, on Sunday, August 25, 2019.

On Wednesday, September 15, Prime Minister Andrew Holness announced the new curfew measures that will run from September 18 to October 28. These new measures will see the curfew running from 8:00 p.m. to 5:00 a.m. from Monday to Friday. The curfew will run from 6:00 p.m. on Saturday to Monday at 5:00 a.m., with Sunday being a no-movement day.

Terrence Richards, senior programmes coordinator of the SDC, said the new restrictions have made it very difficult for his organisation to continue the competition and reasoned that they had no other alternative but to postpone the tournament until further notice.

At the point of its suspension, the competition was in the quarter-finals stage with eight of the 202 participating teams remaining in the tournament.

“Unfortunately, we have to suspend games at times based on the new curfew hours that were announced by the prime minister earlier this month,” said Richards. “Sunday is our preferred day to play. However, we were using Saturdays when the curfew hour was at 8:00 p.m. Now that it has been moved to 6:00 p.m., it does not allow enough time for the players to complete two matches at each venue and get home on time.”

He underscored that despite the setback, he is not expecting any negative effect on the players.

Richards also noted that there have been no reports of anyone who has been associated with the competition contracting the COVID-19 virus.

“We still have enough time to complete the competition and the players are eager to get on with it and I know that they are looking forward to finishing the tournament,” Richards said.