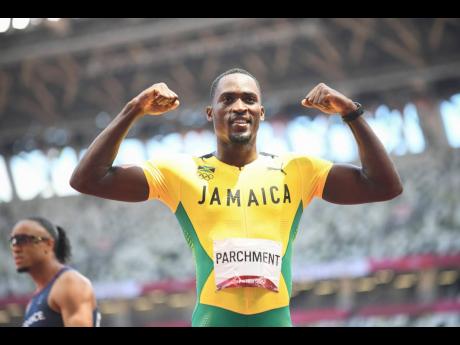 That’s the word from Parchment himself in an interview posted on September 29 on the World Athletics web page. He hopes the extension will bring him another Olympic medal.

At 31, the Port Morant native is already the eldest man to win Olympic gold in the sprint hurdles, but he isn’t daunted.

“I feel like, for hurdlers, we can go a little longer, it doesn’t require that much fast running to get the right times, it’s more technique and execution,” he told World Athletics.

His 2021 season will serve as encouragement. Despite a campaign foreshortened by injury, Parchment peaked perfectly and produced the third-fastest time of his life – 13.04 seconds – to upset favoured American Grant Holloway to win the gold medal in Tokyo, Japan. That ranks just behind the 13.03s he clocked to get the silver at the 2015 World Athletics Championships.

“My plan is not to go past 2024; that is where I’d cap things off,” he said. Asked if he believes he can win a third Olympic medal, he replied, “Hopefully.”

The Fitz Coleman-coached athlete faces a hurdle placed in his way by history. Canada’s Mark McKoy, the 1992 champion, is the only 110m hurdles winner over 30 years old. The Guyana-born McKoy was months away from his 31st birthday when he triumphed in Barcelona, Spain. Parchment and McKoy aside, all the other Olympic 110m hurdles champions have won while they are in their 20s.

Fortunately, the history of the World Championships is much more promising. American Greg Foster won the 1991 World title at 33, with Allen Johnson, another American, taking the 2003 crown at 31. Similarly, Britain’s Colin Jackson zoomed ahead to win the 1999 gold at 32 as well.

The next edition of the World Championships will be staged in Eugene, Oregon, next year, from July 15 to 24.

Parchment may have company from other sprint hurdlers who, like him, may be thinking that experience is beneficial. When he won his 2015 World Championship silver medal, he was 0.05 behind Russian Sergey Shubenkov. The fast Russian turns 31 on Monday. In addition, Spain’s Orlando Ortega, the 2016 Olympic bronze medallist, will celebrate his 31st birthday during the Eugene World Championships.

Both of these veterans and Jamaica’s 2016 Olympic champion Omar McLeod missed Tokyo.