Weight an advantage to She’s A Wonder 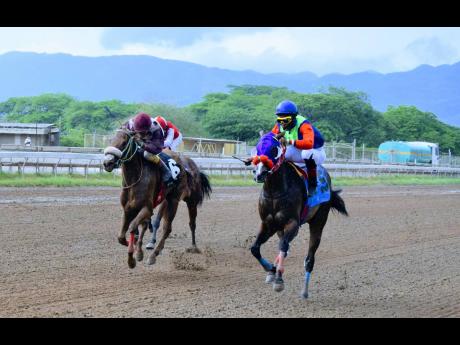 File
SHE’S A WONDER (right), ridden by Reyan Lewis, wins the Portmore Cup at Caymanas Park on Saturday, May 1.

GUINEAS and Oaks winner SHE’S A WONDER will be wondering where’s the weight on Saturday when she reports at 114lb, the lightest she has been in almost a year, taking on older horses for the first time in the I’msatisfied Trophy at six furlongs.

Unlike Derby third-place FURTHER AND BEYOND, who got the luxury of facing overnight-allowance runners, because he had failed to win a three-year-old classic, SHE’S A WONDER, who has never finished ahead of him in a race, has been sentenced by ‘conditions’ to face older horses at a level higher – having won the 1000 Guineas, beating three-year-old fillies.

However, SHE’S A WONDER is such a classy filly, running superlight, by her standards, that open-allowance company might not stop her from logging a seventh win in 13 starts, drawn perfectly on the outside should she, as she is prone to do, miss a step at the gate.

EL PROFESOR, LABAN and DUKE are all run-on sprinters, drawn on the inner, stalls one to three, with the speedsters – MAKEUPARTIST, GOD OF LOVE and SHE’S A WONDER – coming around fast and furious heading into the half-mile turn.

MAKEUPARTIST comes in at 112lb, after clocking 1:11.4 to beat overnight-allowance runners last Saturday, but faces a baptism of fire at the level, which has unrelenting pace, unlike the mediocre field she blew away on a fast track.

GOD OF LOVE’s connections have decided to wring every ounce of weight allowance possible, jocking off leading five-pound claimer, Oshane Nugent, from the overnight programme for Romario Spencer’s nine pounds, taking 124lb down to 116.

Reporting at 116lb, GOD OF LOVE, who saw nothing but SHE’S A WONDER’s stablemate MAHOGANY’s exhaust at five and a half furlongs back in August, is always a tough customer when on song. Though he’s more of a specialist at five and a half furlongs, consistently a 1:06.0-plus sprinter, GOD OF LOVE could make SHE’S A WONDER and company pay for any mistake made at the gate.

SHE’S A WONDER might not have run a sprint race since beating imported LURE OF LUCY at five furlongs round in February, contesting the longer classic events and their respective preps. However, the distance races might be a blessing in disguise. The filly’s stamina, which will be required in the closing stages of a six-furlong sprint, would have been tempered by the longer trips, making her even more dangerous should she need to change gears in a duel.

Galloping with FATHER PATRICK Sunday morning, SHE’S A WONDER clocked 1:15.2 on the round, eight days after GOD OF LOVE posted 1:16.3 for the distance, though the clockers reported him as being ‘easy’ in his workout.