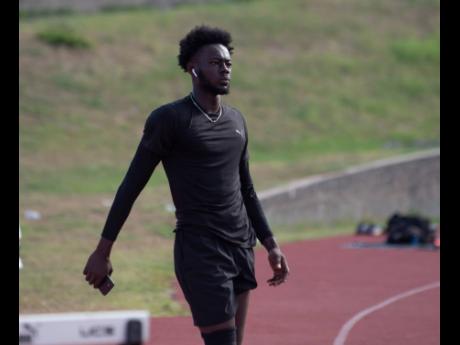 Gladstone Taylor
Rasheed Broadbell looks on during a MVP training session at the Stadium East track on June 22, 2021.

Following The Gleaner’s reports that breakout sprint hurdler Rasheed Broadbell has decided to leave the MVP Track Club, his father, Maurice, who is also a member of the athlete’s management set-up, has expressed disappointment with his son’s injury-ravaged season.

Maurice, who underlined his satisfaction with Broadbell’s development within the MVP Track Club programme, remained coy when pressed to confirm the hurdler’s departure, but admitted to feeling let down that Broadbell was not able to complete his season, missing out on a chance to compete at the Olympic Games.

According to our information, Broadbell, who clocked a personal best 13.10 seconds last season to end the campaign as the seventh fastest man on the planet and the fourth fastest Jamaican, wrote to the MVP hierarchy outlining his decision to end his two-year relationship with the club.

“I think I will leave the news as it is. No comments. I can’t confirm that,” Maurice said.

Broadbell, who we understand will now be coached by Reynaldo Walcott, is the latest athlete to leave the University of Technology-based outfit.

His move follows the exit of World 100m champion Shelly-Ann Fraser-Pryce, who left the club in 2019, and the expected departure of double Olympic sprint champion Elaine Thompson Herah, who has also signalled her intention to leave long-time coach Stephen Francis.

“His development has been excellent, nothing less at all. I can’t take anything away from his development. His growth has been really positive and I wouldn’t expect anything less either,” Maurice told The Sunday Gleaner.

He, however, could not hide his disappointment with Broadbell’s injury setbacks. This coming on the back of reports that the sprint hurdler’s handlers are not pleased with the handling of his injury situation.

Broadbell was forced to miss the National Senior Championship, as a result missing out on a chance to make Jamaica’s Olympic team to Tokyo 2020.

“As anyone would be, of course, I am disappointed. Naturally, when an athlete is doing well and you don’t get to see them performing at the top level, regardless of medals, that’s what we all wanted to see. So I am definitely disappointed,” Maurice stated.