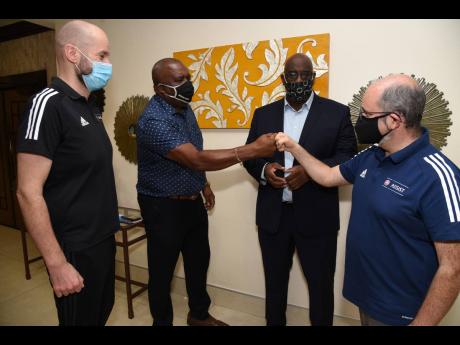 Professional Football Jamaica Limited (PFJL) General Manager Arlene Martin says a change to its approach to broadcasting was responsible for revenue generation in the Jamaica Premier League (JPL) this season.

She says that this was down to aid from UEFA Assist, a development programme by the governing body of European football.

Its representatives, who have partnered with the Jamaica Football Federation (JFF), are on the island this week conducting a four-day workshop, which started yesterday, with JPL coaches and administrators.

The initiative, which also partners with Concacaf, seeks to offer shared knowledge about best practices to further improve the administration within the top-flight clubs in the country.

“We had a lot of training sessions on broadcast models – what different broadcast models were around the world, and so we structured our bid process and/or bid documents on broadcast based on the technical assistance that we received then,” Martin told The Gleaner. “The model that we pursued was to separate broadcast from host broadcast, which is the production side. So that was the first thing that we did in terms of separating it. And then did a competitive bid process for the broadcast rights.”

While not disclosing specific figures on the revenue generated, Martin said that they are now on a path to continue earning from the current model and meet a standard equal to many of the top leagues in the world.

It is a framework that UEFA Assist official Kenny MacLeod says that Jamaica is prime to capitalise on, compared to the other countries in the region, with the goal of having clubs not depend solely on PFJL for financial support.

“The commercialisation of football properties is very important and with that broadcast sponsorship public sector investment, what you are seeing are trends,” he said. “I would say probably Jamaica, and the JFF, are more ready to take advantage of those [opportunities] than maybe some of the other federations and think what we would like next is very much looking at what commercialisation we can make.”

Martin says that for the 2022 season, PFJL will be pursuing an international broadcasting agent, which was not secured for the 2021 campaign because of the COVID-19 pandemic.

MacLeod says that the workshops this week will also help to not only give the clubs the means to be financially independent of assistance from the league organisers, but also for a universal look and feel that will attract international broadcasters to showing games to a global audience.