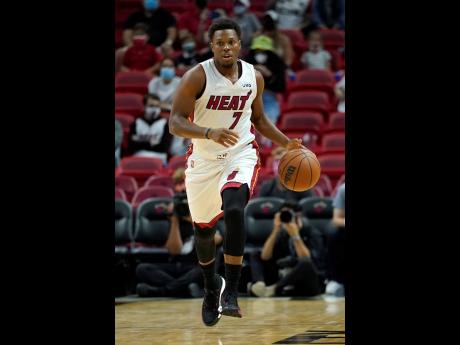 AP
Miami Heat guard Kyle Lowry in action during the first half of a preseason NBA basketball game against the Charlotte Hornets, Monday, October 11, 2021, in Miami.

Kyle Lowry has been teammates with many of the best players in the world. He won an NBA championship in Toronto. He helped the U.S. capture an Olympic gold medal five years ago. He’s been to the All-Star Game six times.

When he gets around such players, he always sees the same thing.

Talent, Lowry insists, isn’t enough to win. But talent and smarts – the combination that he believes exists with the Miami Heat – can take a team a very long way. That’s why he’s in a new uniform for the first time in nearly a decade.

Lowry is Miami’s new point guard, forming a trio with Bam Adebayo and Jimmy Butler that the Heat hope will be enough to get them back into title contention.

“He’s just a great winner,” Heat coach Erik Spoelstra said of Lowry. “He knows how to impact winning. You can look at all the accolades, he’s a decorated player, and all of it is earned. But when you weave through all of that – the All-NBA’s, the All-Stars, the Olympic team, all of this stuff – it really boils down to him finding a way to impact winning, and he does it on both ends of the court.”

The Heat are barely more than a calendar year removed from going to the 2020 NBA Finals; that series ended October 11, 2020. But last year’s team never got firing like that one did, and wound up getting swept in the first round by eventual NBA champions Milwaukee.

So, Miami spent the summer getting tougher. Lowry was acquired from Toronto in a deal that sent Goran Dragic to the Raptors. The Heat added rugged forwards P.J. Tucker and Markieff Morris as free agents, ensured Butler wouldn’t be free anytime soon by getting him to sign an extension and kept sharpshooter Duncan Robinson around with a new deal as well.

Tucker, Morris and Lowry all have NBA championships. That wasn’t lost on Robinson.

“They have experience and championship pedigree,” Robinson said. “They all have their own games and what they bring, but from an approach standpoint, they have a common thread. Miami, as an organisation, we have a very clear vision of how we want to be how we want to play. I feel like this team, as much as any team I’ve been on here in Miami, aligns with that vision really, really well.”