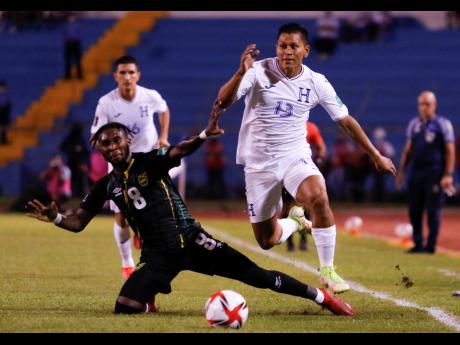 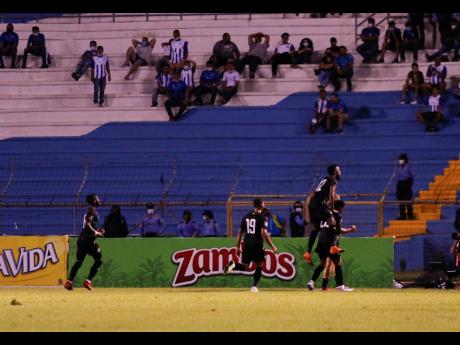 AP
Jamaica’s Kemar Roofe is congratulated by his teammates after scoring the opening goal against Honduras.
1
2

UNDER PRESSURE and desperate for a win, Jamaica came up big, defeating Honduras 2-0 to score their first victory and revive their hopes in FIFA World Cup qualifying football competition. In the away match at Honduras’ Estadio Olímpico Metropolitano...

UNDER PRESSURE and desperate for a win, Jamaica came up big, defeating Honduras 2-0 to score their first victory and revive their hopes in FIFA World Cup qualifying football competition.

In the away match at Honduras’ Estadio Olímpico Metropolitano in San Pedro Sula, Kemar Roofe and Oniel Fisher both scored their first-ever goals for their country to earn a win that lifted Jamaica to five points.

Roofe deflected a shot from Shamar Nicholson past Honduras goalkeeper Luis López at the 38th minute, to hand Jamaica a well-deserved 1-0 lead in a first half they should have won by a clearer margin, as they had several good opportunities to score.

Fisher produced a classy finish to ease some tension as Honduras threatened the Jamaica goal with a series of plays in that period of the first half.

The goal play began on the right with an interchange of passes between Adrian Mariappa and substitute Bobby Reid. The latter played a pass inside to another substitute, Andre Gray, who turned to his left and fed the unmarked Fisher, who drifted back to his right before curling the ball between two defenders and wide of the outstretched López into the wide arc of the goal for a 2-0 lead.

In five previous matches, the Reggae Boyz had failed to record a victory and, for the second match running, they were recording their second clean sheet, having drawn 0-0 against Canada at the National Stadium in Kingston on Sunday.

Now, for the first time since this eight-nation qualifying series kicked off in September, the Jamaica team has moved off the bottom of the table.

Honduras, who are winless, stay bottom with three points from three draws. Jamaica were tied on five points with El Salvador, who at press time were drawing 0-0 with Mexico in last night’s late game. The United States have 11 points, this after registering a come from behind 2-1 victory over Costa Rica in their home match in Columbus, Ohio. The Costa Ricans have six points, two less than Panama, who were pummelled 4-1 by Canada at Toronto’s BMO Field. Canada moved to 10 points and occupy third, while Panama dropped to fourth on eight points.

The top three teams will automatically qualify for FIFA’s Qatar 2022 World Cup Finals, while the fourth-placed team will get another chance through an inter-continental play-off.

Following last night’s matches, all the teams would have played six matches and now have eight more to complete their 14-match tally.

Head coach Theodore Whitmore also went for a stronger back line, playing three at the centre in Lowe, Je-Vaughn Watson and Adrian Mariappa.

This presented more flexibility for the full backs to attack and Oniel Fisher on the right capitalised with plenty of runs up the flank.

His attacking runs fully mirrored Jamaica’s all-round play as, but for the first couple minutes, they were completely dominant from midfield right through the pitch, with the midfield in total command and Roofe looking solid when dropping back from the front line to make several incisive passes.

In the midst of this offensive onslaught, Jamaica conjured a constant stream of goal-scoring chances from the 14th minute straight through to half-time and were only denied a country-mile lead by the excellence of Honduras’ goalie, López, who made a string of fine saves.

Roofe started the run of on-target finishes with a deflected shot from the top of the 18, but López responded well to clutch the ball. Twice (16th, 22nd) Flemmings shot powerfully and was denied, and Williams (17th) forced a diving save from the custodian with a low shot from outside the box, before Nicholson headed Kemar Lawrence’s corner kick wide of goal.

Honduras, on the other hand, had one decent first-half opportunity when Lowe was stripped of the ball at the edge of the penalty area. However, the attacker dragged his shot across goal.

For the second half, Jamaica consolidated early while Honduras pressed to get back in the game. It took a while before they started making any serious impact on the Jamaica defence but, when they eventually did, after the hour mark, they grew in confidence and went close to scoring on at least three occasions, only to be thwarted by some last-ditch defending and goal-mouth blocking.

Of course, a panicking Jamaica team aided their cause. But the longer the game went without an equaliser and with Jamaica looking to break at every opportunity, Honduras remained vulnerable and eventually succumbed when Fisher, playing in his 23rd match for his country, finished calmly and with aplomb to settle the issue once and for all.

The Reggae Boyz will return to action in FIFA World Cup qualifying on Friday, November 12 away to El Salvador in San Salvador. The game is set to kick off at 10 p.m. Jamaica time