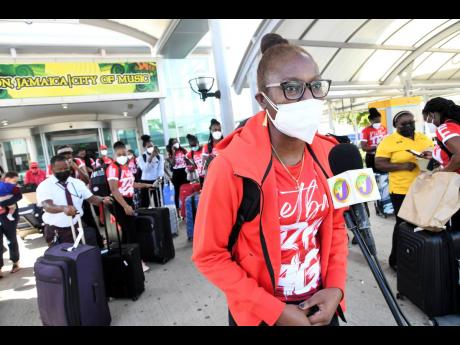 Rudolph Brown
Trinidad and Tobago senior women’s netball team captain Kalifa McCollin on arrival at the Norman Manley International Airport yesterday, ahead of the team’s tour of Jamaica where they face the Sunshine Girls in three test matches, then a select men’s national netball team.

Trinidad and Tobago (T&T) senior women’s netball team captain Kalifa McCollin has sent a warning to Jamaica’s Sunshine Girls that they will be coming out firing on all cylinders in their upcoming three-test Sunshine Series.

The matches, which will be played without spectators, are set for the National Indoor Sports Centre on October 16, 18, and 20. Both teams will also engage a select men’s national team in one-off games.

McCollin told The Gleaner, upon the team’s arrival at the Norman Manley International Airport yesterday, that they have assembled what she considers a very strong squad with youth and experience and she is expecting her side to put up a good showing against the Jamaicans.

“Normally, when we play the Sunshine Girls, I think we just participate against them and think ‘well they are a higher ranked team’, but now we are here to stamp our authority and show what we are about,” she said. “I think you should just expect a different brand of netball, very fast-paced, short and sharp movements and expect some flair as well.”

RANKED 10TH IN THE WORLD

The Trinidadians are ranked 10th in the world, six below the Sunshine Girls, and in the last meeting of teams at the 2019 Netball World Cup in Liverpool, England, the Jamaicans beat them 68-43.

“I think, for us, the biggest thing is to close the gap because we want to ensure that we do what is right and stick to our processes and execute our game plan as best as possible,” the captain said.

McCollin, 26, plays goal shooter and goal attack, and represents Collingwood Magpies in the Australia’s Suncorp Super Netball. She said that they will be without the services of experienced shooter Samantha Wallace, who will be missing the series for personal reasons.

“We have a lot of new players coming in and we have some experience because we have four players coming from the last Netball World Cup in Liverpool. So we have a beautiful blend of experience and youth coming through,” McCollin said. “The girls have been working extremely hard because I came in a few weeks ago and I have seen a shift in attitude towards what we are doing. We are working with purpose this time around, so I think that the preparations going into this series have been good.”