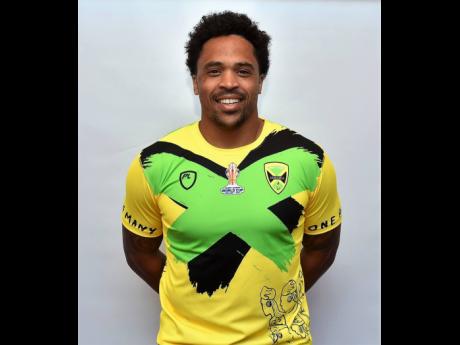 Contributed
The game between Jamaica Reggae Warriors and England Knights today will be a testimonial to Jordan Turner (pictured).

Jermaine Coleman hopes that two tough games in 10 days will provide a sizeable stepping stone on the way to preparing Jamaica’s rugby league squad to make their World Cup debut next year.

The country’s 13-a-side rugby team face England Knights – a youthful side comprising what is seen as the host nation’s future – in a representative match at Castleford in Yorkshire today at 1:45 p.m. Jamaica time then play Scotland in a full international on October 24.

The squad is made up largely of British-based expatriates and players with Jamaican heritage although a few amateurs from the steadily expanding domestic competition have been included in the past.

Lead coach Coleman, a Leeds-born ex-player who took over the reins at former Super League and current Championship club London Broncos last month, said, “We have always tried to blend in players from Jamaican clubs, but with the complications that COVID has presented, we decided it was easier to go with players already based in England this time.”

Duhaney Park Red Sharks duo Khamisi McKain and Jenson Morris played in the corresponding fixture at Headingley in Leeds in October 2019, which a more experienced England Knights won 38-6 and Coleman, whose father was Jamaica born and bred, continued, “By the time the World Cup comes round we will potentially have up to six players from the island ready to take part in the group stages.

“This next week is an opportunity to get back together again in a ‘camp’ and also introduce some new players who haven’t featured in the past.”

Among those included in the 21-man squad, 17 of whom will take to the field today, is Abevia McDonald, who began playing the game at Excelsior Community College in Kingston and also impressed for Liguanea Dragons and Duhaney Park before signing for English League One club London Skolars.

Today’s game is a testimonial for Castleford Tigers’ Super League star Jordan Turner, a strong running centre who will captain the Reggae Warriors, as Jamaica have become known.

Turner, 32, has just completed a stellar season for the Yorkshire side and is best remembered for scoring a hat-trick in the Tigers’ 35-20 Challenge Cup semi-final victory over Warrington, which took the club through to Wembley, where they lost to league and cup double winners St Helens.

Jamaica are the first Caribbean nation to qualify for the Rugby League World Cup, which was cancelled this year when defending champions Australia and New Zealand pulled out due to COVID-19 travel restrictions.

The Reggae Warriors beat the USA and Canada to make the last 16 and now join the Kiwis, Lebanon, and Ireland in the group stages, which begin on October 15, 2022.