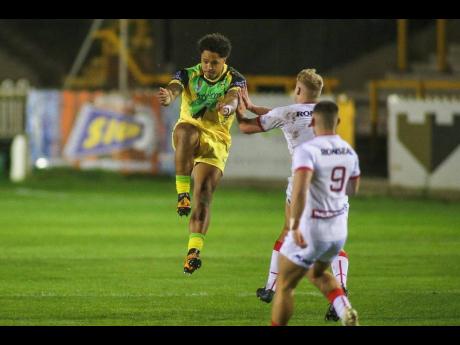 Lead coach Jermaine Coleman admitted that there was plenty of work to be done between now and next October’s World Cup after an enthusiastic but outplayed Jamaica crashed 10 tries to one (56-4) to a youthful England Knights — seen as the host nation’s stars of the future.

The Reggae Warriors — the first Caribbean country to qualify to contest rugby league’s premier prize — will face the mighty New Zealand, Ireland and the Lebanon in the group stage of the competition and looked disjointed and error-ridden in their first game together for two years.

Coleman, the recently appointed coach of London Bronco’s in Britain’s Championship, said he was disappointed but added:

“We need to spend as much time together as possible between now and the World Cup.

“It’s difficult with players coming from different places and playing at different levels as well as having to take time off work.

“But we have a programme in place which should allow us to spend as much time as possible together to train and progress to the standard we need to be at to compete.

“We have some senior players out injured and a couple of those should be back when we play Scotland in our next game in just over a week’s time.”

COVID-19 implications prevented any amateurs travelling from Jamaica, so an all-Britain-based Reggae Warriors were listed as the ‘home team’ as the game was being staged as a testimonial for 32-year old Castleford Tigers centre Jordan Turner.

But the coolest Yorkshire night of the United Kingdom (UK) autumn so far bore little resemblance to Kingston, no matter how many Bob Marley records blared out of the public address system in deference to the beneficiary, who has played over 350 professional games in the UK and scored 17 tries for the Tigers in Super League and cup competitions last season.

After a promising start and with Jamaica on the attack, a stray pass from Turner was intercepted by Leeds Rhinos teenager Jack Broadbent who raced 80 metres to score, albeit chased into the corner by James Woodburn-Hall.

Huddersfield half-back and ‘man of the match’ Will Pryce, whose great grandfather was ironically born in Jamaica, converted both to give the Knights a 12-0 lead.

Things got worse for the Caribbean side when Halifax full back James Woodburn Hall had to be helped groggily from the field after a clumsy high tackle from Knights prop George Lawlor, who was sent to the sin bin for 10 minutes

Veteran winger Ben Jones Bishop capitalised on the one-man advantage to pull a try back for the Reggae Warriors but the men in yellow and green had their defence breached again before half-time through scores from Pryce and Aaron Smith to take a 24-4 lead into the changing rooms.

Luckless Turner’s evening got worse within seconds of the restart as the Jamaican skipper for the night fumbled the kick-off and allowed Broadbent to dash in and claim his second ‘gifted’ try.