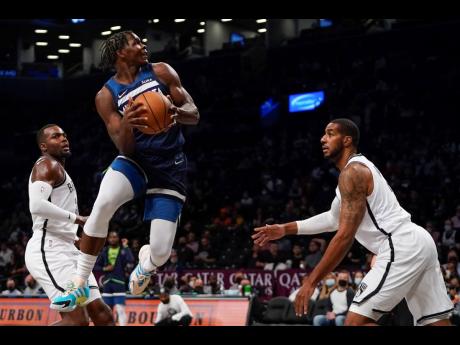 AP
Minnesota Timberwolves’ Anthony Edwards drives past Brooklyn Nets’ Paul Millsap (left) and LaMarcus Aldridge during the first half of a preseason NBA basketball game on Thursday in New York. The Nets won 107-101.

If so inclined, an NBA player could now test himself for the coronavirus and get results on his phone in no more than 20 minutes.

And the league is convinced that those tests are both fast enough and accurate enough.

It is a high-tech answer to the issue of waiting for test results. The NBA has partnered with a company called Cue Health, which is providing the league with technology that allows anyone to essentially test themselves for COVID-19. A person applies the swab to the inside of their nose, places it in a reader — roughly the size of two decks of cards — connected wirelessly to their smartphone and gets the results back much faster than most other alternatives can deliver.

The NBA, based on a study done by the Mayo Clinic, says the tests are right 97.8% of the time. Cue was in the process of using the technology for flu tests when the pandemic began then pivoted quickly when the scope of the world’s global fight against the coronavirus became clear.

“We were in clinical studies when COVID hit,” Cue CEO and co-founder Ayub Khattak said. “It was a pretty quick transition for us because the platform is really modular, so making COVID-19 tests was relatively routine for us.”

The relationship with Cue and the league has now touched parts of three seasons. It essentially began when the league was assembling plans for the NBA’s restart bubble to finish the 2019-20 season, and the technology has only continued evolving since. The test is of the molecular diagnostic variety and is authorised by the Food and Drug Administration.

“We have great experience with the Cue test and are confident in its effectiveness to identify cases when testing is necessary in our highly vaccinated population,” said Jimmie Mancell, the team physician for the Memphis Grizzlies and vice-president of the NBA Physician’s Association. “The Cue test’s accuracy is more than acceptable for point-of-care screening as no test is 100 per cent accurate. If clinical suspicion remains high, we are capable of validating the results with additional testing.”

For now, it doesn’t seem likely that many in the NBA will have to use the Cue test on a regular basis.

Those who are fully vaccinated will not be tested regularly. Only the players who are unvaccinated — roughly four per cent of the league, or, basically, one per team on average — will be subject to taking the tests on practice, meeting, and travel days. Game-day clearance for those players will still require a conventional PCR test.