Glass half full – JFF targets 50% capacity for US WCQ clash 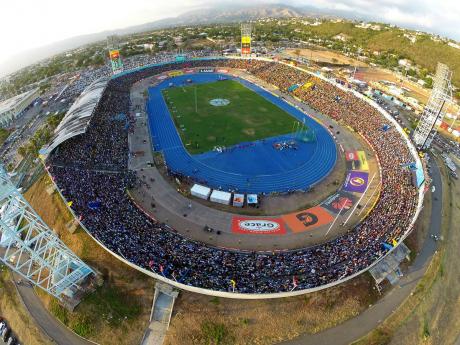 Gladstone Taylor
An aerial view of the National Stadium at full capacity on the \final day for the ISSA/GraceKennedy Boys and Girls’ Athletics Championships on Saturday, March 28, 2015. The Jamaica Football Federation has requested a 50 per cent capacity for Jamaica’s World Cup qualifier against the United States on November 16, 2021 in light of the coronovirus pandemic.

Jamaica Football Federation (JFF) General Secretary Dalton Wint says that the administration is now in a better position to lobby and gain approval for fans to return to the National Stadium for the World Cup qualifying (WCQ) campaign. The JFF...

Jamaica Football Federation (JFF) General Secretary Dalton Wint says that the administration is now in a better position to lobby and gain approval for fans to return to the National Stadium for the World Cup qualifying (WCQ) campaign.

The JFF will once again lobby for fully vaccinated spectators to return, setting a target of 50 per cent capacity (approximately 17,500 persons), starting with their November 16 match against the United States (US).

Jamaica is the only country in the eight-team final round qualifying tournament that has played their home games without spectators, with a request for fans to be allowed for the match against Canada inside the National Stadium, October 10, rejected by Local Government Minister Desmond McKenzie days before the game.

Wint says that an official request has been made to the Government and added that the JFF is confident in its ability to manage the targetted crowds in the current climate.

“We have gathered the experience. We have travelled to other venues. The United States had 100 per cent (capacity), El Salvador is about 50 per cent and Honduras was about 50 per cent of the capacity of the stadium. We know that we will be able to take care of 50 per cent, so we have asked for that,” Wint told The Sunday Gleaner.

Compared to the proposal made for the Canada game in the middle of the current COVID-19 restrictions, Wint made the point that the administration now has a longer time to prepare its case.

“Timing was an issue (for the last game). I think we have a little bit more time now. The positivity rate is trending down, so that will give us a better opportunity to get Minister McKenzie (onboard). His ministry has the last say in this thing happening, so we want to see how best we can appeal (to him) to ensure we get that positive answer,” Wint said.

The country reported a positivity rate of 19.1 per cent on Friday

For that favourable response, Dr Nicole Dawkins-Wright, director for the Emergency, Disaster Management and Special Services Branch of the Ministry of Health and Wellness, says they have to be convinced of the JFF’s ability to manage the crowd and ensure no unvaccinated patron slips through the cracks.

“Among the (requirements) would be the verification of individuals in terms of their health status, and the other broad category will be how to handle the crowd or the persons in the space. in terms of conforming to the required protocol,” Dawkins-Wright said. “And there are other considerations in terms of what our security forces can handle and the other stakeholders in the whole management of the event.”

Part of the proposal, according to Wint, includes an electronic ticketing system that requires prospective patrons to submit their health status and be verified before they can purchase a ticket. This will also see patrons given seat assignments in the grandstand and controlled entrances for sections in the bleachers.

Wint said that there would be a zero-tolerance approach towards fans who do not follow the respective protocols.

However, Dawkins-Wright said that deciding on an acceptable capacity level would be determined by the risk assessment and the measures proposed.

“You can have a superspreader from any size event, so it is really how we manage the persons. So, I don’t think it would necessarily be depending on the state of where we are, what capacity would work,” Dawkins-Wright said. “But if you were to work with one, then we would look at the risk level and the provisions in place (as well as) the capacity, (in order) to determine what maximum persons can go to the event.”