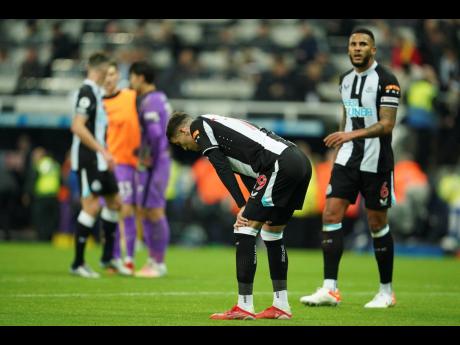 AP
Newcastle’s Callum Wilson (second right) and Jamaal Lascelles react to their loss at the end of their English Premier League match against Tottenham Hotspur at St James’ Park in Newcastle, England, yesterday. 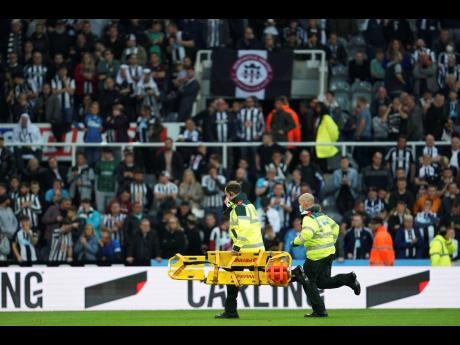 AP
Left: Medics run with a stretcher to treat a spectator struck with a medical emergency in the crowd at St James’ Park yesterday.
1
2

Callum Wilson headed Newcastle in front only 107 seconds into the new era under Saudi ownership before the hosts collapsed to lose 3-2 to Tottenham in the English Premier League yesterday.

It leaves Newcastle with three points from eight games, stuck in the relegation zone and with no ability to spend on new players until the January transfer window.

Tanguy Ndombele began Tottenham’s comeback in the 17th minute after Sergio Reguilón rolled the ball across the penalty area. The visitors went into the lead five minutes later when Harry Kane scored his first league goal of the season after lifting a shot over goalkeeper Karl Darlow.

Son Heung-min got on the end of Kane’s cross to extend the lead in first-half stoppage time.

A further blow came for Newcastle in the 83rd when Jonjo Shelvey, a 60th-minute replacement for Sean Longstaff, was sent off for a second bookable offence after tripping Reguilón.

Newcastle were handed a surprise lifeline when Eric Dier headed into his own net but Tottenham held on for a second consecutive win.

Tottenham are on 15 points in fifth place, four points behind leaders Chelsea.

The game was suspended just before half-time for 20 minutes when a supporter required medical treatment before being taken to the hospital.

It was Reguilón who called referee Andre Marriner’s attention to the situation, and teammate Dier who was alert to the emergency and indicated a defibrillator was required in the stand. The players initially waited by the side of the St James’ Park pitch, before leaving for the dressing room.

“There is a medical emergency in the East Stand,” the stadium announcer said, before later telling the crowd the players would be returning.

The supporter continued to receive treatment in the stands before being wheeled away by the side of the field to applause in the stadium.

“Our thoughts are with the person receiving emergency medical treatment,” the announcer said.

Newcastle said the spectator was taken to hospital.

“The supporter who was in need of urgent medical assistance has been stabilised,” the club said.