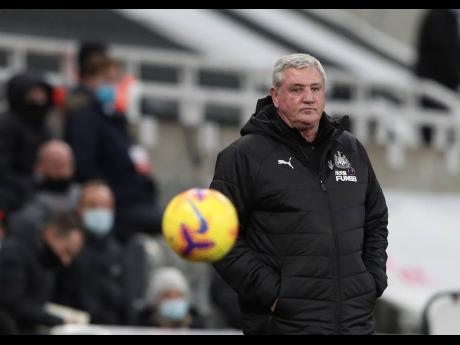 AP
Then Newcastle United head coach Steve Bruce watches his team from the side lines during the English Premier League match against Liverpool at St James’ Park in Newcastle, England on Wednesday, December 30, 2020.

The new Saudi ownership of Newcastle made its first big call since buying the English club, firing manager Steve Bruce yesterday as part of its efforts to reshape the team and stay in the English Premier League (EPL).

There was an inevitability about the departure of Bruce, who was given no assurances about his long-term future at Newcastle after the £300 million takeover by Saudi Arabia’s sovereign wealth fund two weeks ago.

The 60-year-old Bruce left by mutual consent, Newcastle said, even though he insisted last week that he would fight to stay as manager of his hometown club, which he joined in July 2019.

“I hope the new owners can take it forward to where we all want it to be,” Bruce said in a club statement, in which he referenced the “highs and lows” of coaching a “unique” club.

Bruce leaves with Newcastle in next-to-last place in the EPL and without a win after eight games. His last game in charge – the 3-2 loss to Tottenham on Sunday – was his 1,000th as a manager and saw Newcastle fans chant for his firing.

Former Roma and Shakhtar Donetsk coach Paulo Fonseca has been widely linked with a vacancy that is briefly being filled by assistant coach Graeme Jones, who will be in temporary charge for the match at Crystal Palace on Saturday.

Bruce, a former Manchester United defender, wasn’t a popular appointment at St James’ Park because he had previously coached rival Sunderland. Newcastle fans also saw him as a downgrade to predecessor Rafa Benitez and criticised his style of play even though the team tried to adopt a more expansive approach in his final months in charge.

Newcastle finished 13th and 12th in Bruce’s two full seasons as its manager.

“By the time I got to Newcastle, I thought I could handle everything thrown at me,” Bruce, who had coached at nine clubs before Newcastle, told British newspaper The Daily Telegraph, “but it has been very, very tough.

“To never really be wanted, to feel that people wanted me to fail, to read people constantly saying I would fail, that I was useless, a fat waste of space, a stupid, tactically inept cabbage head or whatever. And it was from day one.”

Newcastle said the search has begun for a replacement. Whoever gets the job will become manager of a club that within a few years, is expected to be challenging for UEFA Champions League qualification given the vast resources available to the Public Investment Fund, which is now Newcastle’s majority owner.

The first task is to keep Newcastle in the Premier League, however, with just one transfer window to improve a team that has conceded the most goals – 19 – so far this season and is only a point above last-place Norwich.

“I did my best. I will leave it to other people to judge whether I did OK or not. I wish the new owners, the players, and fans nothing but the best.”