Historic final an inspiration but of little value in opener: Pollard 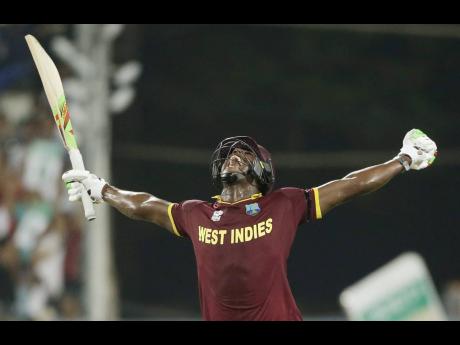 Captain Kieron Pollard says West Indies hope to draw inspiration from their exhilarating victory over England in the final of the 2016 Twenty20 World Cup but concedes that that result will have little impact on today’s clash against the same opponents.

West Indies beat England by four wickets in a nerve-jangling final in Mumbai after Carlos Brathwaite smashed sixes off the first four deliveries of the game’s final over, with the Caribbean side needing 19 runs from the last six balls in pursuit of 156.

Pollard, who missed the 2016 tournament after pulling out of the squad, said the current group watched the final in preparation for the opening game.

“In terms of personnel and bearing to say the [2016 final] will have a big impact, I don’t think so, but it’s definitely going to be at the back of their minds,” Pollard said yesterday.

“I think what Carlos did in those four deliveries in that last over, it’s unbelievable.

“It’s something as a team that we actually saw last night (Thursday), and it brought goosebumps back to us, and for us to be in that situation and get over the line, it shows that never-say-die attitude.”

Only four players of the current squad – Chris Gayle, Dwayne Bravo, Lendl Simmons, and Andre Russell – featured in that final at Eden Gardens.

Brathwaite, who was appointed captain months later, was dropped from the squad two years ago and appears to be off the radar of selectors.

For England, seven players have survived the 2016 final, perhaps handing them the edge in one of the most anticipated fixtures of the October 23 to November 14 tournament.

With five years having elapsed, however, Pollard believes that the dynamics have sufficiently changed to negate any carry-over to Saturday’s contest.

“I don’t think it will have much bearing on the game [on Saturday] because it’s like another game of cricket,” he cautioned.

“That situation was totally different, it being a final. We’re looking forward to coming out and giving a good account of ourselves.”

West Indies’ overall form has faltered ever since their last World Cup triumph, and they enter the current showpiece ranked ninth, only above Sri Lanka and Zimbabwe among traditional Test-playing nations.

However, Pollard stressed that it was time for his unit to create new memories by producing performances of merit over the next few weeks.

“We as a team, we look forward to trying to replicate winning the entire tournament [because] those kinds of moments kind of stick with us,” said the 34-year-old.

“Hopefully, we can just go out and play good cricket and get in a position and a situation where we’re actually in the final so we can have some memories as well going forward.”