Ready for the challenge 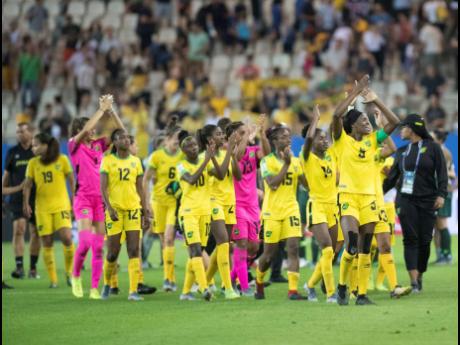 File
Jamaica’s senior women’s football team, also known as the Reggae Girlz, comprises players of various backgrounds, many of whom are born in other countries but qualify to represent the country by virtue of parentage.

In a squad that includes the majority of the players that helped Jamaica to qualify for the 2019 FIFA Women’s World Cup in France, Van Zanten who plays for the University of Notre Dame, and Gayle who plays in England with Leicester City will seek to impress in a position that has already been stapled by national striker Khadija Shaw.

For Van Zanten, her first senior call-up represented not only the journey that her Jamaican mother made, but how the team valued her overall development compared to the United States, where she was born.

“She moved to the US when she was 16 and joined the US Military and stayed here to work to provide everything she could for me and my sisters,” Van Zanten said. “And I think the US has such a big pool and they are always bringing in new people. They are not really focused on individual player development, they are always just focused on who is the best.

“And I think with Jamaica, they are really focused on building a team and working together long term. So I just felt like that was a better option for me, so I felt that the Jamaican team could really see my value as a player.”

Born in England, Gayle’s path to the national team was shaped by her late grandmother, who was the main driving force for her switch.

“Just listening to her speak about her being Jamaican and living back home that kind of inspired me to get in touch with my heritage, my culture,” Gayle said

“Playing for England at the youth stages, I was thinking that the chances of me playing for the seniors at my age now is unlikely. Coach Hubert [Busby] got in touch and I just felt wanted and just felt like it was the right thing to do to play for Jamaica.”

Gayle played in Jamaica’s closed-door scrimmage against Costa Rica on Thursday, which they won 1-0 from a Drew Spence penalty. With the Girlz’s World Cup qualifying timeline pushed back to next February, Van Zanten and Gayle are on missions to be part of the future of the programme.

“I think the most important thing for me is working as hard as I can because I can’t always control how many minutes I’m going to play, how many goals I’m going to score,” Van Zanten said. “So with whatever time that I am given with this opportunity, I think I’ll walk away happy if I know that I tried my hardest and gave everything I could on the field.”

“It’s a bit of pressure but this is what I do for a living,” Gayle said. “I am excited and hopefully, this game against Costa Rica can show my talent and ability and hopefully I can be in the next camps representing Jamaica in major tournaments.”