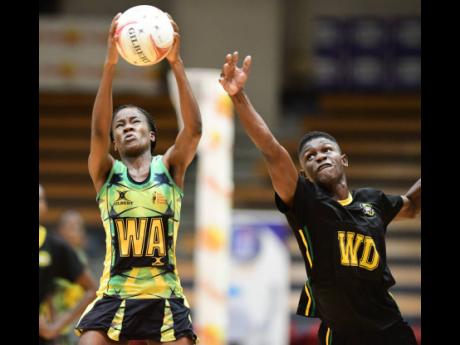 The Sunshine Girls started the game very shakily as they were outmuscled by their male counterparts at both ends of the court.

In fact, they failed to find the rhythm in the first period as they committed 11 turnovers, against the men, who took a narrow 13-10 lead at the end of the first quarter.

However, the Sunshine Girls, who are ranked fourth in the world, came firing on all cylinders in the second stanza as captain Jhaniele Fowler scored nine of the team’s 10 goals as they outscored the men 13-7 to take a 23-20 lead at half-time.

The Sunshine Girls defensive unit of Shamera Sterling, Latania Wilson and Shadian Hemmings played brilliantly during the second period as they forced the men into a number of turnovers.

However, the men fought their way back into the match during the third period as they outscored the Sunshine Girls 16-14 to reduce the deficit to 37-36 at the end of the quarter.

The men played very aggressively as they challenged the ladies on every possession, which forced them into turning over 12 times in the period.

The Connie Francis-coached team came out much stronger in the fourth quarter and they led by as many nine goals in the period, with Fowler dominating with 11 goals as they romped to victory.

Francis said she was very pleased with her team’s performance because they fought very hard throughout the match.

Fowler led the way for the Jamaicans with 37 goals from 40 attempts. She received support from Shanice Beckford 13 from 15 while Gezelle Allison had one from three.

Raheem Wallace top-scored for the men with 30 goals from 40 attempts while captain Kurt Dale netted 14 from 17.

“It was really tough for us but I thought that the girls really stood up to the physicality of the men,” said Francis.

“I think that the male team was awesome because they never gave up and they contested each pass and we were sloppy at times but in the end, I thought that our fitness helped us to prevail,” she said.

Shawn Murdock, coach of the men’s team, said they played well despite the defeat. I thought we started really well but we just lost momentum in the second quarter and I think that we were just giving away the ball too easily and we paid the price for that,” Murdock said.

“The Sunshine Girls are a better team and, of course, they are in training but our biggest challenge is that we were turning over possession too easily,” he said.