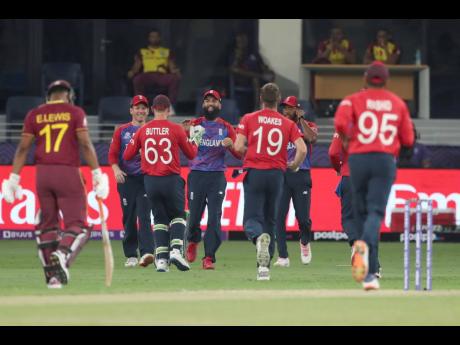 AP
England's Chris Woakes (19), runs with his teammates to congratulate Moeen Ali (centre), after he caught West Indies' Evin Lewis off the bowling of Woakes during the Cricket T20 World Cup match between England and the West Indies at the Dubai International Cricket Stadium, in Dubai, UAE, on Saturday.

THE WEST Indies looked anything like the defending champions of the ICC Men’s World T20 title, after going down to an embarrassing six-wicket loss to England in their opening Group One match in Dubai yesterday.

The batting frailties of the regional side were once again exposed, as they were sent in by England and dismissed for a mere 55 runs in 14.2 overs, their second lowest total in T20

England eased to victory, despite losing four wickets, taking just 8.2 overs to get the runs which enabled them to lead the group with a healthy net run rate of 3.970.

Adil Rashid and Player of the Match, Moeen Ali, were the stars with the ball for the England side. Leg-spinner Rashid bagged four wickets for just two runs, while Ali bagged two for 17 to

Veteran Chris Gayle was the only West Indies batter to get into double figures, scoring 13 from as many balls, with three fours.

Dejected West Indies captain, Kieron Pollard, could not hold back his disappointment of losing the opening encounter and in such manner.

"It was unacceptable, we accept that. These sorts of games sometimes, we just need to bin it. For us, it's just a matter of finding our straps. We haven't batted well in our three games so far. We went out, guys tried to play their shots and it didn't come off," said Pollard.

"I don't think any sort of panic will come into our camp. It is what it is, we just need to take it on our chest and move on, this is international sport,” said Pollard.

The West Indies will next face South Africa on Tuesday.