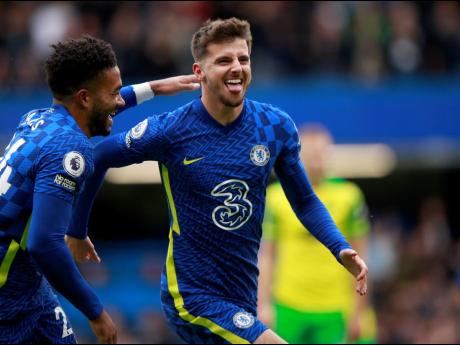 Chelsea and Manchester City did not field a recognised striker between them for their English Premier League games yesterday.

It did not stop them combining for 11 goals in ominous displays by the two title contenders.

City do not have an out-and-out striker in their squad after failing to sign a like-for-like replacement for Sergio Aguero in the off season, but that is not stopping the champions scoring freely this season.

A 4-1 victory at Brighton, secured mainly thanks to two goals by Phil Foden, followed a 5-1 win at Club Brugge midweek in the Champions League. It was the sixth time in 14 games in all competitions that City have scored three or more goals.

Chelsea will spend another week leading the league – they are two points ahead of City and four clear of Liverpool, whose game in hand is at Manchester United today – and the strength in depth in the squad should ensure Thomas Tuchel’s team maintains a title challenge this season.

There have been 16 different scorers for Chelsea in all competitions this season, with Callum Hudson-Odoi, Reece James and Ben Chilwell also netting against last-place Norwich alongside Mount’s first Premier League hat-trick.

City are in a rich vein of form, too, especially with Foden taking on the scoring and creative mantle while playing in the false-nine role. The 21-year-old England international converted a pass from Jack Grealish at the end of a breakaway, then saw a shot from Gabriel Jesus deflect in off his heel to make it 3-0 at half-time, with Ilkay Gundogan having set City on their way with the opener at fourth-place Brighton.

Foden set up Riyad Mahrez for the fourth goal in second-half stoppage time.

It has been quite the ride for Claudio Ranieri so far at Watford.

Having started with a 5-0 loss at home to Liverpool last weekend, Ranieri – who turned 70 on Wednesday – saw his new team beat Everton 5-2, thanks to a hat-trick by Josh King that was completed amid a rush of four goals from the 78th minute for Watford at Goodison Park.

“It was important to show the character, the strength and to react to the result,” Ranieri said. “We were playing well, but suddenly we scored in nine minutes three times – it was amazing.”

Joy for Ranieri, but despair for Everton manager, Rafa Benitez, whose team was jeered off the field after a second straight home loss. It might not be long before supporters turn against Benitez, a contentious appointment for some given his links to local rivals Liverpool.

“I understand the frustration of the fans,” he said. “We have to make sure we show something in every game, more character, more personality.”

Newcastle are still waiting for a first win under the club’s new Saudi ownership.

A first point arrived, though, thanks to a goal from an overhead kick by Callum Wilson in a 1-1 draw at Crystal Palace. Christian Benteke had given Palace the lead and had a late goal disallowed for a foul in the build-up.

Leeds were waiting to discover the extent of a concerning-looking left ankle injury to star winger Raphinha that he sustained in a 1-1 draw against Wolverhampton.

The Brazil international was already off the field with his injury when Rodrigo earned Leeds a point with a penalty in the fourth minute of stoppage time. That cancelled out Hwang Hee-chan’s 10th-minute opener for Wolves.

In the day’s other match, Ivory Coast winger Maxwel Cornet scored two goals for Burnley – including the equaliser – in a 2-2 draw at Southampton.