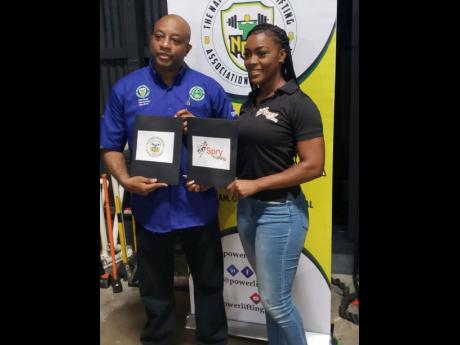 THE SPORT of powerlifting has joined the race to earn acceptance as an Olympic event. But while that development is in its early stages, the local association, the National Powerlifting Association of Jamaica (NPAJ), is pushing to become a member of the Jamaica Olympic Association (JOA).

Michael Blair, president of the NPAJ, said they are close to completing the stipulations his 10-month-old organisation needs to achieve that goal.

JOA President, Christopher Samuda, listed the criteria for membership, noting that the NPAJ is required to demonstrate activity islandwide, have a legal constitution, an administrative structure, ensure there is a pool of athletes and they must get endorsed by the international federation.

Samuda said when they are satisfied those things are in place, the association will make every effort to grant membership.

“We are assisting them as best as we can. Once we are satisfied and once they get an endorsement from the international federation, not just membership, then certainly we will give consideration,” said Samuda..

“The objective is to ensure it becomes an Olympic sport, as that will facilitate the ambitions of the local association, them being a member,” he added.

Blair pointed out that they have covered most of the requirements, including endorsement from the International Powerlifting Federation (IPF).

He argued that powerlifting is one of the least recognised sports locally and being a member of the JOA would greatly assist the generation of much-needed funding.

“We are at a very high per cent in terms of fulfilling the requirements. We started last October and by December of the same year we were part of the international body,” said Blair.

“We have selected a head of our national programme. We have linked with JADCO and have had our JADCO training sessions already and we have our IPF youth programmes where we are educating our coaches,” he said.

“Powerlifting is not an Olympic sport. The JOA is the umbrella organisation for Olympic sporting associations in Jamaica. But they (JOA) also have members who are not Olympic sport, like cricket and netball. So being a member will help us get developmental funding,” Blair explained. “It is a way of getting funding because at the moment we have no sponsors and we have no funding and so we have to look to the Sports Development Foundation (SDF) and the JOA.”

The NPAJ is broken down into internal members and athletes. There are 90-odd members, comprising board and committee members and 10 registered athletes, with another 15 pending medical clearance from the NPAJ medical committee.

The association also signed MOUs with The University of the West Indies (UWI) for injured athletes to get proper treatment, with Spry Training (gym) to allow athletes and national teams to train properly without distractions.

“We are going to sign another MOU soon that ensures our coaches are certified through a university here in Jamaica. So they will be recognised,” Blair divulged. “We want to help form clubs so they can compete against each other and we are going to get involved in the schools.

“We have already spoken to ISSA and we will have a MOU on the table shortly to roll out our school programme and all this is slated for next year,” he noted.

Although the Jamaica Powerlifting Federation (JPF) had existed a few decades earlier, it faded from existence and the NPAJ is now the body in Jamaica recognised and authorised by the IPF to develop and administrate the sport and to compete in their tournaments.

“We are able to participate under the IPF and North American Powerlifting Association (NAPA) banner, as we are the only organisation that they recognise,” Blair stated.

The first national championship is due to take place on the 27th and 28th of November and it will be geared towards selecting athletes for the North American powerlifting tournament in Panama 2022.