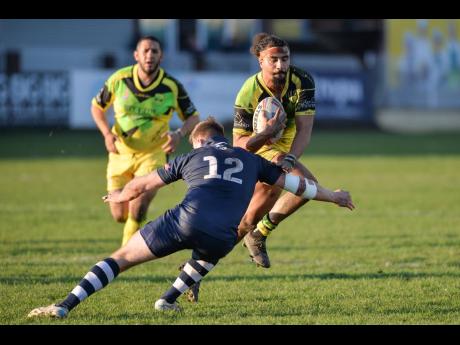 Jamaica staged a staggering comeback to snatch a famous draw against Scotland in their latest preparation game yesterday ahead of next year’s Rugby League World Cup.

Scotland, ranked ninth in the world before the game, led 30-10 early in the second half, but four Jamaican tries without reply in the final 30 minutes secured a memorable result for the fledgling nation, who have have been on the international scene for only 12 years.

Jamaica made one change from the side which was beaten 56-4 by England Knights 10 days before, with Sheffield Eagles halfback Izaac Farrell coming in after serving a two-game suspension.

After absorbing some early pressure, the Reggae Warriors took the lead in the eighth minute when elder brother Joel Farrell went close and hooker Jy-mel Coleman dived over from acting halfback.

Five minutes later, with Scotland attacking, Ben Jones Bishop picked up a loose ball and raced 80 metres up the Featherstone slope and into the corner to take the Caribbean side into double figures, however, after converting the first try, Izaac Farrell was unable to repeat the feat from near the touchline.

Both Farrell brothers were then held up over the line in quick succession as Jamaica pressed for more points, Mo Agoro also going within inches on the right flank.

There were several moments of concern after loose forward Ashton Golding went down following another interception out of defence by Jacob Ogden. But, after almost 10 minutes’ treatment on the pitch, the former Leeds and current Huddersfield Giants player, now with significant strapping around his forehead, was able to continue.

Momentum swung when Keenen Tomlinson was sin-binned after the green and golds began to concede a stream of penalties. By the time Jamaica were restored to a full complement of 13 men, they had seen their lead wiped away.

James Bell put Charlie Emslie through a gaping hole to score, before an outrageously long, looping pass from centre field allowed winger Will Oakes to cross unopposed and level the score.

Ben Helliwell and Dale Ferguson added further tries for Scotland before half-time, and, with Lachlan Walmsley landing all four conversions, the men in navy blue went in leading 24-10 at the break.

Barely a minute after the restart, Emslie claimed his second try, and with the clouds over Yorkshire having parted, the autumn sunshine was now shining brightly for the Scots.

But strong-running Jones-Bishop grabbed his second try of the game, with Izaac Farrell’s goal narrowing the deficit to 30-16. Then, aided by the incline and showing less indiscipline, the Warriors commanded much more territory and possession.

Joe Brown scored a fourth Jamaican try in the corner, then Jordan Andrade, whose sister Savannah made her England debut in the women’s international against France in Perpignan the previous day, crashed over from close range to bring the island nation to within four points and set up a tense finish.

Ferguson received a yellow card for a high tackle, and the 12-man Scotland were punished when substitute Alex Brown scored in the corner with less than four minutes to go.

Izaac Farrell’s touchline kick to win the game fell agonisingly short of clearing the crossbar. After Ryan Brierley’s late drop goal attempt for Scotland went wide, the teams had to settle for a 30-30 draw.