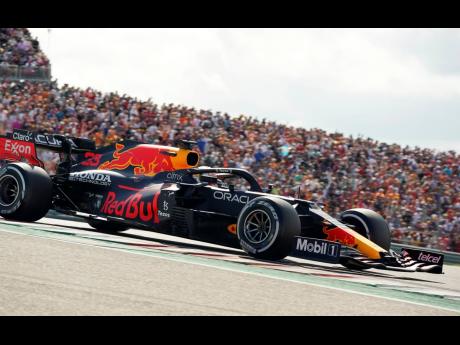 Eric Gay
Red Bull Formula One driver Max Verstappen goes through a turn during the United States Grand Prix at the Circuit of the Americas in Austin, Texas yesterday.

Max Verstappen held off Formula One (F1) title rival Lewis Hamilton over the final thrilling laps of the United States (US) Grand Prix yesterday to win his eighth race of the season and double his lead in the championship standings.

Verstappen, who entered the Circuit of the Americas (COTA) with a six-point lead over Hamilton in the standings, now leads the seven-time champion by 12 points, with five races remaining.

Hamilton, in his Mercedes, was bearing down on Verstappen over the final 18 laps and had cut the Red Bull driver’s lead to less than one second by the final lap. But he couldn’t make the pass at the end and settled for second.

Verstappen, the 24-year-old Dutchman, chasing his first championship, now has some breathing room heading into Mexico City, a high-altitude stronghold for Red Bull.

Hamilton, a five-time winner at COTA who couldn’t catch Verstappen in the end, is seeking a record eighth F1 title.

“Congratulations to Max, he did a great job today. It was such a tough race,” Hamilton said. “Got a good start and gave it absolutely everything, but, in the end of the day, they just had the upper hand this weekend.”

As the popularity of Formula One explodes in the US, the championship rivals delivered a dramatic finish under a blazing Texas sun in front of an estimated crowd of 140,000. It was one of the largest sporting events since the start of the pandemic, and drew the rich and famous to the Austin circuit.

Among the celebrities in attendance were actor Ben Stiller, rapper Meghan Thee Stallion, golfer Rory McIlroy, and tennis champion Serena Williams, who all participated in the pre-race grid walk. Shaquille O’Neal hosted a post-race DJ dance party and delivered the winner’s trophy to the podium, where the seven-footer loomed large over Verstappen and Hamilton.

Yesterday was the final race in the Circuit’s original 10-year contract, but the US Grand Prix is on the 2022 race calendar. Track President Bobby Epstein has said he expects to get a new long-term deal from F1.

“It’s amazing to be here, but also to see so many (fans) around the track,” Verstappen said before stepping to the podium as fans rushed onto the track. “Hopefully we can do this for many years to come.”

Verstappen and Hamilton were locked in a tense fight all weekend, first when Verstappen called Hamilton a “stupid idiot” and flipped him the middle finger during Friday practice. Then Verstappen edged Hamilton for pole position on the final lap of qualifying yesterday.

It set up a fierce fight for the lead headed into the first turn because the winner at COTA has always come from the front row. Hamilton quickly jumped past Verstappen and the two traded the lead four times over 56 laps.

But Hamilton just couldn’t make one more pass in the end. It’s a missed victory at a circuit where Mercedes have been dominant, and yesterday’s result could prove pivotal if Verstappen hangs on to dethrone Hamilton.