Capturemyship the one to sparkle 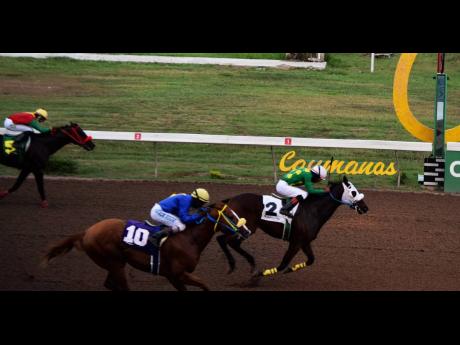 Ripping splits of 22.3 and 44.3, the speedy seven-year-old made his way to the faster stands’ side, meeting off-the-break SPARKLE DIAMOND challenging from his wide draw.

Full of running when asked to keep his challenger at bay, CAPTUREMYSHIP stayed on strongly to clock 57.4, winning by a half-length at his favourite trip.

CAPTUREMYSHIP handed Thomas a second winner on the nine-race card after snatching the third event in a driving finish aboard THUNDERSTRIKE, nailing long-time leader, ITSABEAUTIFULDAY, who tried to make all at seven furlongs.

DaCosta landed the second for two-year-olds with 16-1 outsider, FLY MESSENGER FLY, who was kept wide of runners and out of trouble by female rider, Abigail Able, avoiding multiple instances of interference, which resulted in the disqualification of second-past-the-post BABYLIKE.

In the fourth, DaCosta’s United States-bred I AM FRED proved his previous run was an off-day, outclassing rivals at seven furlongs, after his September 22 hat-trick bid was marred by a third-place finish behind DADDY JONES, who he beat into fourth with a fast-time win in 1:32.4.

Nunes, keeping DaCosta honest in the trainers’ stakes championship, grabbed his two-timer on the back end of the card, even-money favourite BIG PAUL in the seventh and MAGICAL MOOD in the nightpan, outfinishing 4-5 favourite MUM, who tried to make all at five and a half but ran out of steam inside the last half-furlong.