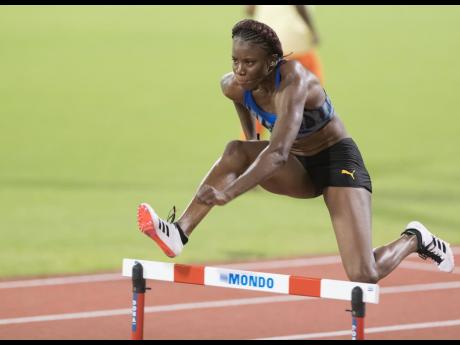 WORLD 100-metre hurdles champion in 2015, Danielle Williams, is on her way back from injury, and according to coach Lennox Graham, her prospects for 2022 are bright.

Graham is happy to report that the hamstring injury that ended her 2021 season is behind her.

The mishap felled the 2019 World Championships bronze medal winner in Brussels on September 3.

“She hurt her hamstring in that race, early in the race. I guess the competitive nature took over and she didn’t stop early enough, and made it a little bit worse than it needed to be. But she got treatment in Germany, did rehab in the off season, in-between vacation, and she’s back in training for the first week though,” Graham reported.

Nevertheless, Williams and Graham are taking it slowly.

“On the track we’re not pressing that hard at this time, but she’s good enough to do what we have to do right now. There’s no limp or anything, and no discomfort, so that’s good,” he added.

When the injury happened, Williams was repairing a season in which she placed fourth at the National Senior Championships.

“Even with all that had happened, the injury in Brussels, we had just come back from the Olympic period and ran 12.64 and 12.50, so she was finding her rhythm back. It was uplifting to know that her rhythm was coming back, which felt like we needed just two more races. But that wasn’t to be,” the coach reflected.

“So we’re looking forward to this season and, it’s like, we’re going to do great things,” he said.

Graham was overjoyed to learn that Jamaica tied an all-time high of nine ladies running the 100-metre hurdles faster than 13 seconds this season.

“It’s awesome for the future,” he said, while recalling concerns raised when 2009 World champion Brigitte Foster-Hylton, bronze medallist Delloreen Ennis-London and 2002 Commonwealth champion Lacena Golding-Clarke were coming to the end of their track careers.

“The cupboards were pretty bare and we were wondering where the next one was going to come from. Since then we’ve had World Youth champ, World under-20 champ, World champions, Diamond League champions, Continental Cup champion. It’s really, really stacked right now. It’s one of the more difficult teams to make, I think, in any country, the Jamaica 100-metre hurdles,” he listed.

“A lot more people are coming forward, not planning to pay dues. The people who have been there for a while have to be on their A game to keep making these teams, Graham predicted. “But that’s what competitive sport is about.”