MVP has much work to do 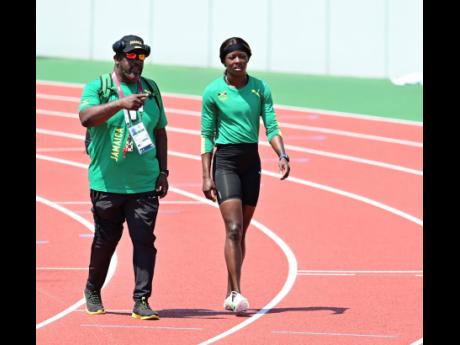 HEAD COACH of world-beating athletics club, MVP, Paul Francis, is confident that they will continue to produce world-beaters in the sport that has brought Jamaica the most fame and glory across all sporting disciplines. Francis spoke to The Gleaner...

HEAD COACH of world-beating athletics club, MVP, Paul Francis, is confident that they will continue to produce world-beaters in the sport that has brought Jamaica the most fame and glory across all sporting disciplines.

Francis spoke to The Gleaner days before back-to-back Olympic sprint double champion and the fastest woman alive, Elaine Thompson Herah, made her announcement that she was training independently, signalling that she had finally parted ways with MVP Track Club.

Thompson Herah was a virtual unknown in the world of athletics before being discovered by MVP, which honed her raw talent into a global force in the sport. However, Francis is not perturbed by the development and looks forward to the upcoming World Athletics Championship in Eugene, Oregon, next year.

“We have remained humble. MVP has always allowed youngsters, people who have never been heard about, to chase their dreams. We continue to give youngsters a chance. We have over 60 persons in training. There will be some that will come to the fore in the 2022 season,” Francis told The Gleaner.

Thompson Herah’s departure has been clouded in controversy due to the athlete’s initial dubbing of reports of her split as rumour-mongering by the media before confirming the reports weeks after. A number of other sprint stars had made their way to the MVP departure lounge before Thompson Herah, including former men’s 100 metres world record holder, Asafa Powell, and Shelly-Ann ‘Pocket Rocket’ Fraser-Pryce.

Francis was, however, quite gracious.

“My mantra in life, the reason why I do this is to change lives, to give one more youngster an opportunity. As adults, these youngsters will make decisions that will be in their best interest. Grandmother said ‘you can’t have your cake and eat it’. I could never think of them as ingrates. Adults have a right to make their own decisions,” Francis said.

He also rubbished reports that Thompson Herah’s husband, Derron Herah, had engaged in disruptive behaviour during MVP training sessions at their University of Technology training camp, which he had also utilised before taking up the role as his wife’s personal coach. Herah also coaches at the Cameron Blazer’s Track Club and St Jago High School.

“Mr Herah has been unobtrusive for the most part. He is a hard-working coach who works on the same training ground. He is not a disruptive element in any shape or form,” Francis said.

The MVP Track Club was formed in 1999 by a group of Wolmer’s Boys’ School alumni including Paul Francis, his older brother Stephen Francis, who is the club’s technical director, club president Bruce James and the late David Noel. The club has made its name for mainly chiselling and fine-tuning the talents of athletes who were not major stars at the Boys and Girls’ Championships.

“The great percentage of athletes who have done well at MVP were not stars at the high school level. What happens when you are stars that early is that you develop a group of people around you. When you are someone who people never expected to come to something, there are people who will gravitate toward you. Usually, the kids who show great potential earlier can easily be derailed,” Francis said.

During last summer’s Tokyo Olympics, the underperformance of male athletes was cause for concern from Jamaican athletics fans who grew accustomed to the exploits of the world’s fastest man, Usain Bolt, and the successes of the world record-breaking male 4x100m teams.

Only Hansle Parchment and Ronald Levy, gold and bronze, respectively, in the men’s 110 metres hurdles, managed to step on the medal podium in Tokyo, while Jamaica’s female athletes copped seven medals.

“From a MVP perspective I think it is a general reflection of society. If you go to our tertiary institutions, you will find that there is a greater proportion of females. They last the course. This is what is happening in terms of the attitude of our women. In society our men are very easily distracted and they will be the ones who will easily chase the glitter,” he said.