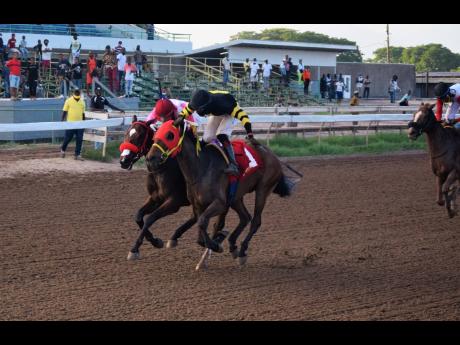 Anthony Minott
SWEET N SMART (right), ridden by Robert Halledeen, wins the ninth race in a thrilling finish ahead of TOMOHAWK, with Anthony Thomas aboard, over a mile at Caymanas Park on Saturday.

THE IMPRESSIVE filly, PRNCSSHOOTINGSTAR, with Oneil Mullings aboard, is the ante-post favourite for the 17th running of the Supreme Ventures Limited Cash Spot Only One For Me Trophy for two- year-olds, which will be run over 1200 metres on Saturday at Caymanas Park.

The race, which is for native bred horses, has attracted purse money of $3.25 million.

PRNCSSHOOTINGSTAR, who is trained by former champion trainer Phillip Feanny, is drawn in gate six in the seven-horse field.

She was very impressive in debut when she won the Betting, Gaming and Lotteries Commission/Thoroughbred Owners and Breeders Association Juvenile Dash over 600-metre on August 3.

FLY MESSENGER FLY, from the barn of leading trainer Jason daCosta, is the second favourite in the event and will be ridden by Abigail Able from post position one.

Lorna Gooden, general manager of the Supreme Ventures Racing and Entertainment Limited (SVREL), said at yesterday’s draw that they are looking forward to a very entertaining race.

“We are very excited about the prospect on the day and we are just asking the punters to come out and enjoy the excitement that will be put on by the thoroughbreds on the track for the day,” said Gooden.

“These are some very good horses and we know that the trainers have worked hard and they will be putting their animals on the track to put on a treat for our punters,” she added.

However, Gooden warned that punters who fail to follow the COVID-19 protocols at the track will be evicted from the facility.

She said: “Our protocols and safety are very important to us because we want racing to continue and so we’re doing everything to ensure that we enforce the mandate that has been issued by the government ministries and if we have to, we will escort some of our guests off the property.”

Meanwhile, daCosta has two other runners in the event; TEKAPUNT, to be ridden by Richard Parchment from gate two and SILENT MISSION, who will be ridden by Anthony Thomas from gate five.

Veteran trainer Richard Azan also has multiple entries in SLAMMER, who will be ridden by Dick Cardenas from post position three, while PERFECT BREW with Oshane Nugent in the saddle is drawn for gate seven.

The other runner in the event is the Anthony Nunes-trained GOLDEN WATTLE, who will run from gate four with Linton Steadman in the irons.