‘Jasper was the professional’ 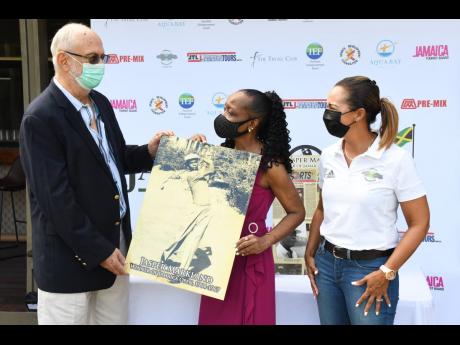 LEGENDARY JAMAICAN golfer Jasper Markland will be this year’s honouree at the 54th staging of the Jamaica Open Golf Championship, which will take place from November 14 -17 at the Tryall Golf Club in Hanover.

Markland, who won the Jamaica Open tournament on two occasions, in 1964 and 1967, passed away some 21 years ago after being the head professional at the Constant Spring Golf Club for over 30 years.

The former ball boy and caddie from Cassava Piece has been instrumental in teaching the game of golf locally, with President of the Jamaica Golf Association, Jodi Munn-Barrow, being one of Markland’s students.

“Jasper was the professional golfer,” said Barrow. “I can’t think of anybody who started golf in my time that wasn’t taught by Jasper. Beyond being a professional golfer, he was a gentleman. He was a role model, and golf in Jamaica would not be where it is without that platform and benchmark of Jasper Markland.”

Margaret Markland, who was present at the press launch of the Jamaica Open yesterday, said her father would have been pleased to see his life and work recognised by the Jamaica Golf Association.

“It is an honour for me and the family, and my father would have been proud, because he dedicated his life to golf and the Constant Spring Golf Club,” said Markland.

Over 65 golfers have so far registered for this year’s 54-hole tournament, with a number of the top 10 finishers from the previous tournament returning. Local pros Orville Christie and Wesley Brown will do battle with overseas entrants Michael Maguire, Stephen Grant, Kurtis Luedtke and David Lawrence, who are all expected back for a crack at the US$100,000 purse money.

Once again, another ‘bubble style’ tournament will take place due to the pandemic, with all golfers and administrators expected to be tested before the action gets under way.

A large contingent from Canada, as well as participants from the USA, Bermuda and Trinidad and Tobago, are expected to square off and despite recent torrential rains in the west, tournament director David Mais says it’s all systems go for the inaugural tournament.

“Tryall is the best-equipped club to handle the maintenance side of things, and we are confident that the golf course will be in good shape for the Sunday event,” said Mais.