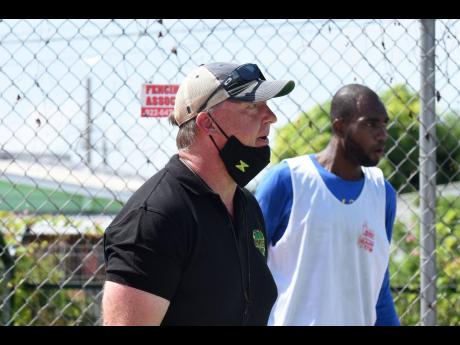 Despite the physical adjustment to the 3x3 basketball format, national senior men’s basketball head coach, Rick Turner, praised the efforts of both the Jamaica’s men’s and women’s teams in the aftermath of their first major 3x3 tournament.

Jamaica competed in the 2021 FIBA AmeriCup last weekend in Miami, Florida, making their tournament debut at this level in this format. The men’s team advanced from qualifying into the main draw with two wins, and made it to the quarter-finals with one win and one defeat.

However, their journey would end in the last eight, losing to eventual champions the United States 22-17. The women, unfortunately, did not fare better as they narrowly missed out on qualifying for the main draw on points after a 1-1 record in their qualifying round.

Turner said that given their lack of experience, he was pleased with how the team adapted through the weekend.

“The physical nature of the 3x3 game is something that you have to experience in order to really know what it’s all about. It is a fight, and I think there is a certain way to 3x3, and you sort of talked about it. And we did. And I thought we got better and better as the tournament went on,” Turner told The Gleaner.

“I think that’s what you expect, especially when you have no experience. Just getting your feet underneath you is something that you need to do. And I think if they replayed this tournament next week, we would be so much more prepared and have an expectation of what’s out there,” he added.

The men’s team, which consisted of Kevin Foster, Romaine Thomas, Jabulani Newby and Taevaunn Price, finished ranked sixth out of the 16 teams that participated. While pleased with how the men progressed, Turner said that the women’s quartet of Antoinette Bannister, Jose Ann Johnson, Tracey Ann Kelly and Ashlee Gordon also put their best foot forward, despite limited experience.

Additionally, Kelly and Gordon were among the local contingent that have been without playing time because of the continued inactivity of local basketball brought on by the COVID-19 pandemic.

With ambitions to build on the 3x3 for the upcoming Olympics in Paris 2024 and beyond, Turner says that he does not anticipate any problems in ensuring that Jamaica can contend in the traditional format as well.

“I don’t want our focus on 3x3 to take away from our focus on 5x5. I don’t think that it will, because at the end of the day, I think we will be able to put a very competitive team together in both sports.”