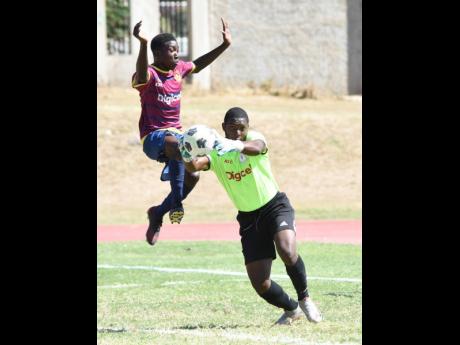 Camperdown High School and St Andrew Technical High School (STATHS) have had contrasting starts to the ISSA/Digicel Manning Cup competition after three games in Group B.

Camperdown secured a 2-1 win over STATHS when they met at Stadium East in Kingston yesterday, to keep their winning streak going. STATHS, who drew their first two games, are still searching for their first win of the tournament.

But Philip Williams, STATHS’s head coach, is not overly concerned about the slow start to the season, as he says that he is undertaking a project with many of his players moving up this season from the school’s youth teams. He says it will take some time to get them to play how he wants them to. While he wants fans to be patient and trust in the process, he says he has the full backing of the school to take the time he needs to achieve his long-term objectives.

“It’s a rebuilding process,” Williams said. “It is one that we have to embrace and acknowledge that the team that we have is a young team and, definitely, we have to be patient with them. We are in it for the long haul in terms of developing them for the next two seasons to come.

“It’s a long season and I’m using it for these youngsters to get the experience needed to survive next year.

Camperdown head coach Donovan Lofters says that while it is good to keep their momentum going, he’s becoming concerned about his team’s conditioning, especially as all their matches so far have started in the noon sunshine.

“We have been playing 12 p.m. matches, we’ve played three consecutive 12 p.m. matches so far and we have another coming up on Wednesday, so we’re getting a little bit leggy, a little bit tired,” he said. “The sun and the atmosphere is not nice, so I’m happy that we could pull out a win and all three points today.”

BRIGHTER OF THE TWO

STATHS started the brighter of the two teams and got on the scoresheet 10 minutes in when Omar Laing scored from a penalty.

Camperdown moved the ball well enough in the first half but did not make enough of their presence in the final third.

STATHS came close to doubling their lead five minutes after scoring, when Namar Nelson went on a mazy run into the box, then crossed to the back post to find Omar Reid unmarked. However, Reid put his free header over the bar.

STATHS had another chance to increase their lead in the 25th minute when Camperdown’s Jardel Williams lost possession in the middle of the park. After receiving possession, Laing charged down the right side then into the box and saw his shot deflect on to the post and out.

They then had a third opportunity to make it 2-0 in the 34th minute but after receiving the ball deep in the Camperdown area, Nelson beats his man and backheels his shot into the hands of Camperdown goalkeeper Alphonso Claken, to the annoyance of the STATHS bench.

STATHS’s wastefulness was punished in the 41st minute by Thompson, who hit a well struck free kick into the top corner of the net from just outside the area, leaving STATHS keeper Jaheim Palmer looking at the ball flying into the net like a work of art.

Lofters says his half-time team talk was instructing them to play what he says is their natural game, based on ball-possession. It paid off because Camperdown were the better team in the second half and claimed their three points in the 64th minute. Striker Devante Archer was given too much space to cut in from the left side and hit a powerful drive with his left foot that left Palmer powerless to stop. Camperdown kept searching for another but did not find it, nor did they need it.

Philip Williams, though, is not upset at his team’s performance and says they were just beaten by a better side.

STATHS’s next game is against Jose Marti Technical High School on Wednesday at 3 p.m. at Jamaica College, while Camperdown face Tivoli Gardens High School in the noon kick-off of that double-header.