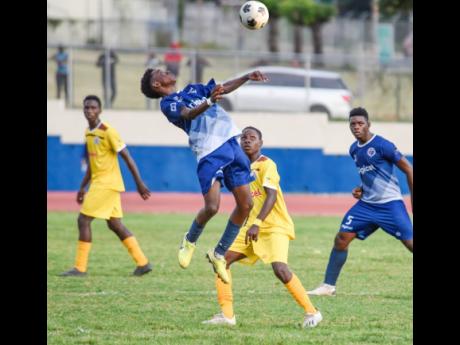 Nicholas Nunes/Photographer
Dyllan John of Jamaica College (centre) jumps to control the ball on his chest, as Rennox Dwyer of Charlie Smith High stands next to him during the ISSA/Manning Cup football match at Ashenheim Stadium, Jamaica College, yesterday. Jamaica College won 2-0.

DESPITE GETTING their first win of the 2021 Inter-Secondary Schools Sports Association (ISSA)/Manning Cup, Jamaica College head coach, Davion Ferguson, was cautious regarding whether the result represents a turning point in their chances in advancing from a competitive Group A.

The defending champions defeated Charlie Smith Comprehensive High 2-0 in their third Group A game, at the Ashenheim Stadium, yesterday afternoon courtesy of goals from Giovanni Mitto in the third minute and Duncan McKenzie in the 36th minute from the penalty spot.

The result ended a winless start to the campaign, which included a shock 1-0 defeat to Kingston Technical High School (KTHS) on Wednesday.

Although acknowledging that he anticipated the sluggish start given the shortened preseason, Ferguson said that they hope to chart a course towards advancing into the second round.

“It’s always important to win, it’s always good when you get three points. We started very slowly, very sloppy in the first two games. I knew it would happen based on the preseason that we had,” Ferguson said. “I don’t know if we have enough time to make it up, but we will go game by game.”

JC now have four points from three games in what is turning out to be a tight group, with KTHS, Charlie Smith and St George’s College all tied on six points. Calabar are level with JC on four points, but have played a game less.

Ferguson lamented his team’s inability to finish in that defeat to KTHS, but praised his team’s ability to convert their chances when comparing yesterday’s match.

“I think we played today (yesterday) with a little more fluency. We are still not where we want to be. It will come with time. Still trying to get the parts together in time, but all in all I believe it was a good performance.”

For Charlie Smith head coach, Eugene Williams, he was not pleased with how his team started yesterday’s match, following back-to-back wins.

“I was definitely disappointed with the start. They caught us cold. They just got the opportunities and made use of it,” Williams said. “I think my guys, they still had butterflies in their belly in playing the defending champions.”

However, Williams says that they are not deterred by the setback, as they still have a good platform for them to progress into the next round.

For Ferguson, he is being more pragmatic in their approach.

“Personally, I’m just thinking about one game and that’s the next game. We want to take it game by game. It’s a truncated season. You have to be careful that you don’t find yourself too far down in the pack too early,” Ferguson said. “So our next focus is to get these boys recovered and focus on the next game.”