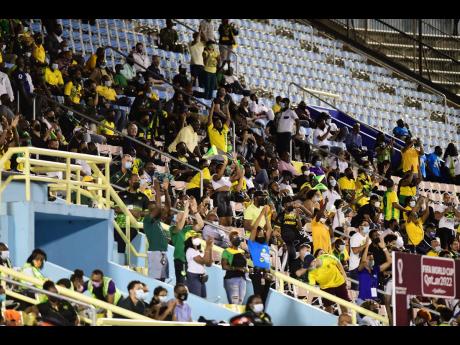 Gladstone Taylor
Fans in the grandstand watch the Concacaf World Cup qualifying football match between Jamaica and the United States at the National Stadium last Tuesday.

Although falling short of their intended fan target for last Tuesday’s home World Cup qualifier against the United States (US) at the National Stadium, Jamaica Football Federation (JFF) General Secretary, Dalton Wint, says that he is targeting approval for 50 per cent capacity at minimum for future games, starting next year.

The US game, which ended in a 1-1 draw, was the first home game the Reggae Boyz played in front of their supporters so far in this campaign, with a maximum of 5,000 fully vaccinated people being approved to attend. In total, 4,100 attended the game, 900 short of their intended target.

Wint attributed missing their goal to growing pains experienced by the online system used to purchase tickets, but says that they are nevertheless pleased in getting home support back for the first time in more than a year.

“Not completely satisfied (with the number), but we are comfortable. We know that it is the first time we are doing this in terms of electronic tickets. Most of our patrons were late purchasers of tickets. People were trying to get themselves approved (on the day of the match) which was impossible. So we know why we did not have the targeted number,” Wint told The Sunday Gleaner. “But it is a decent start.”

It is a start that Wint hopes will bear fruit to more fans being allowed to watch the Reggae Boyz play their remaining four home qualifying games, starting with their January 27 clash against Mexico.

Jamaica previously played two of their home games against Panama and Canada without fans in attendance.

Wint says that they are targeting a minimum of 17,500 spectators (50 per cent of the stadium capacity) and are encouraged in being able to execute the operation given their recent experience with the pilot programme.

“That is our intention because we would be able to assess what took place. And we know we can, with some tweaking, be able to manage a larger crowd. We are committed to work on the weak areas and build on the strong areas,” Wint said.

Additionally, Wint said that so far they have not received any official complaints from the local authorities, which he feels is a good indicator of how the programme turned out and their chances of increasing the numbers for future games.

Sports physician Dr Akshai Mansingh says he was impressed with the process of verifying the vaccination status of patrons, which for him was a chief concern in getting the approval for fans to return.

“The handling of ensuring that there were vaccinated spectators and verifying them was done very professionally and obviously I think there is a very good chance of increasing the capacity,” Dr Mansingh said. “Especially with the (COVID-19) numbers coming down, I think that it’s time to incentivise those who are vaccinated and also maintain the protocols so that we don’t have (massive spread).”