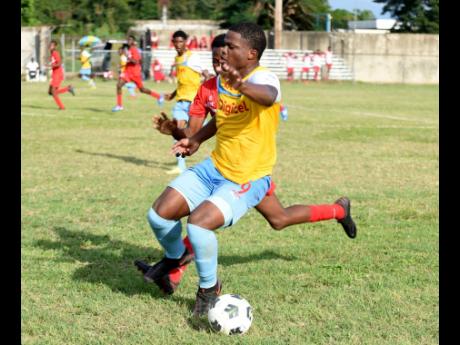 St George’s were led to their second win of the competition courtesy of a 35th-minute long-range effort from captain Brian Burkett.

Moreover, their defenders stood firm in the second period to deny a number of attacking runs from the Bridgeport High team, who outplayed their opponents for most of the stanza.

Gayle said he was very happy for the win because his team had to pull out all the stops to collect all three points.

“It is always good to get three points because the guys did a lot of work in training this week and it (win) is a testimony to that,” said Gayle. “We are still learning and we are just taking it each game at a time.

“I think we defended very well because our concentration was on point and so I am very pleased about that,” Gayle continued.

He pointed out that his players have been showing signs of improvement with every game.

“I think that we are getting better and the players are starting to believe and starting to do what we want them to do. But with time and more games, we will improve a lot more,” he said.

“Two games and three goals I think that if we can keep clean sheets, it will be good for us going forward in the competition,” Gayle stated.

St George’s took control of the game from the opening minutes and they dominated the exchanges. They were finally rewarded when Burkett’s 30-yard effort went through the hands of goalkeeper Jahiem Williams and into the goal.

However, Bridgeport High, who were suffering their second defeat of the season, came out firing on all cylinders in the second period, but they were kept at bay by solid defending from St George’s College.

Fabian Taylor, coach of Bridgeport High, said he was displeased with his team’s effort because they should have at least come away with a point from the game.

“I am feeling very disappointed because I thought we were the better team for most parts of the game and we got some opportunities to score, but we failed to put them away,” said Taylor, the former national striker.

“We have been showing signs of improvement. The first game was a wake-up call and so they are really getting into themselves now and believing a lot more in what they are doing on the field,” he said.