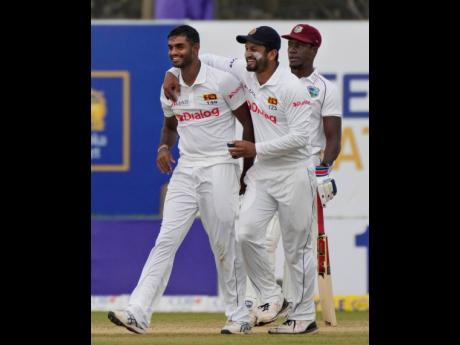 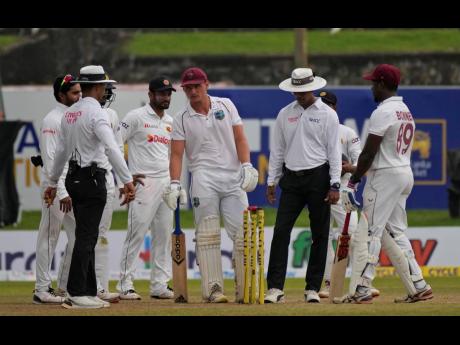 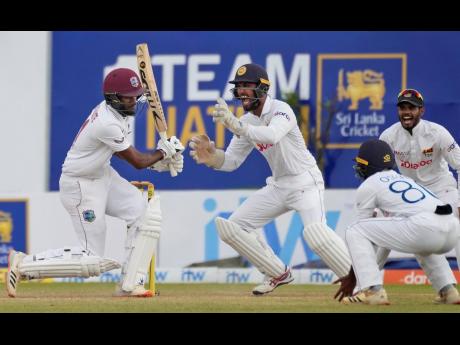 FECKLESS WEST Indies were staring at yet another heavy defeat on Sri Lankan soil, after suffering an appalling second innings collapse on the penultimate day of the opening Test here today.

Set an improbable 348 for victory in four sessions, the Caribbean side slumped to 52 for six before bad light forced players from the field and signalled a premature end to play at the scenic Galle International Stadium.

Starting their run chase after Sri Lanka declared their second innings on 191 for four on the stroke of tea, West Indies appeared headed for one of their lowest totals in Tests when they tottered embarrassingly on 18 for six at one stage.

However, Nkrumah Bonner (18 not out) and wicketkeeper Joshua Da Silva (15 not out) combined in a seventh-wicket stand of 34 to frustrate Sri Lanka’s victory bid and push the contest into the final day.

Off-spinner Ramesh Mendis once again tormented the visitors with four for 17, while left-arm spinner Lasith Embuldeniya finished with two for 18.

With rain also forecast for tomorrow, West Indies will be hoping for help from the weather in saving the game, especially still requiring 296 runs to win and with only the tail remaining.

“I feel everyone is disappointed (but) it’s the nature of the sport,” Bonner said following the day’s play.

“People will get out in cricket and that will happen. It’s just up to me and Josh and the rest of batters to try and get the job done.

“It’s a simple plan tomorrow just to bat time and score as many runs as possible,” he said.

Resuming the morning on 224 for nine following a 45-minute rain delay, the West Indies first innings lasted only another 19 minutes before last-man Shannon Gabriel was lbw to Praveen Jayawickrama for two, the left-arm spinner finishing with the best figures of four for 40.

Armed with a 156-run lead, Sri Lanka then quickly went about their business, captain Dimuth Karunaratne top-scoring with 83 to follow up his first innings 147, and former skipper Angelo Mathews blasting an unbeaten 69 off 84 deliveries.

They lost Pathum Nissanka cheaply for three in the third over with just four runs on the board, gloving a catch to Shai Hope at leg slip off off-spinner Rahkeem Cornwall (2-60), while Oshada Fernando fell for 14, lbw to left-arm spinner Jomel Warrican (2-42).

However, the West Indies’ hopes of limiting the hosts were dashed as Karunaratne and Mathews came together to dominate in a 123-run, third-wicket stand, which took Sri Lanka to lunch on 84 for two and helped them control the second session.

The left-handed Karunaratne faced 104 deliveries in 2-¾ hours and counted nine fours, while Mathews clobbered half-dozen fours and a brace of sixes.

Karunaratne and Dhananjaya de Silva (one) fell just following the drinks break, but Mathews found an ally in Dinesh Chandimal (10 not out) to add a further 28 off 17 balls for the fifth wicket and multiply the touring side’s woes.

Captain Kraigg Brathwaite started the rot when he missed a pull at Mendis in the third over and perished lbw without scoring with three runs on the board and his opening partner and vice-captain, Jermaine Blackwood, followed for nine, three overs later, recklessly dragging Embuldeniya to Mathews at mid on.

With three runs added, the right-handed Hope was bamboozled and comprehensively bowled for three, playing back to Mendis at 14 for three, and in the very next over, Roston Chase was bowled through the gate by Embuldeniya for one.

Mendis then struck twice in successive deliveries in the next over to leave the innings in peril. First, he earned an easy lbw decision against Kyle Mayers (two) after the left-hander shouldered arms to one which spun back to hit the back pad. And new batsman Jason Holder played for turn to a delivery which held its line and lost his off-stump, suffering the indignity of his fifth first-ball ‘duck’ in Tests.

However Bonner, who had entered at number three, combined with Da Silva to calm the storm, the pair crucially guiding West Indies past their lowest-ever Test total of 47, against England in Kingston 17 years ago.