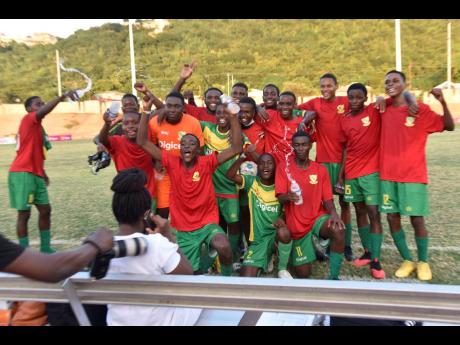 Captain Deshawn Wisdom netted the game’s only goal in time added, after his speculative 40-yard effort eluded goalkeeper Ramiese McKay for the winner.

Kingston High were bombarded by attack after attack from the Red Hills Road-based school.

Kingston High’s coach, Keith Johnson, said the victory was a special one. It also gave them their first points of the season, after four games.

“We came to not give up anything. The plan was to sit back and take a chance if we get it, and it worked to perfection,” he said.

“We knew we were in for (at least) a point and the defence stood up. So hats off to them for the way they fought,” he stated.

Calabar dominated the game and played mostly around Kingston High’s penalty area. However, they were unable to get the ball in the net, despite breaking down their opponents on countless occasions, missing chance after chance with regularity.

Even late in the second half, Calabar had a few close misses and a shot cleared off the line.

But they never saw a goal coming against their team, and Wisdom’s speculative shot from way outside the area caught McKay off his line and the ball dipped under the bar for the game’s winner.

“We were all over them. The game was really played in one half, but they got off one shot that looked like a clearance and it was unbelievable. But that is football,” Laylor reacted.

“We got opportunities but didn’t make use of them. So, whatever the reason, we will have to work on some things,” he said.

Meanwhile, KTHS’ coach, Sean Charlton, thought his team were deserving 3-1 winners over St George’s College, as they continue to lead the group.

“The young men deserved the victory. We outclassed them. We scored in the second minute and that set the tone and the confidence grew,” Charlton analysed.

“We knew we were going to get the three points and now, as a team, we believe we can go further. So we will be pushing them to get result after result,” he said.

12 p.m. Tivoli vs Camperdown at JC