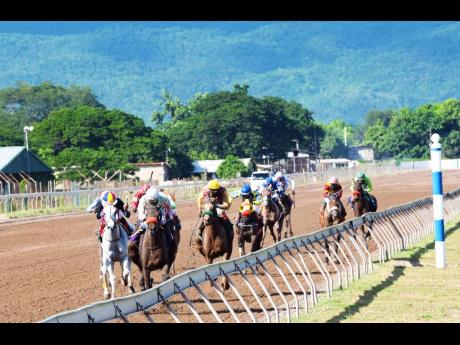 Anthony Minott
RUDS D INDIAN, ridden by Shane Ellis against the rails, wins the fifth race ahead of JJ WARRIOR (partly hidden) and MISS HJF (left) and over a mile at Caymanas Park on Saturday.

THOUGH dominating last month’s Cash Pot ‘Only One For Me’ at six furlongs, completing the stable exacta for Richard Azan, SLAMMER and PERFECT BREW could find themselves in a stew Saturday, going up against BRINKS and POWER, pacey colts coming off impressive victories with Omar Walker.

Walker, the out-of-favour six-time champion, has recently been picking up decent rides from Philip Feanny, including POWER, but has decided to stick with Ian Parsard’s BRINKS, a seven-and-a-quarter length winner on debut at five and a half furlongs, clocking 1:07.3.

POWER ran green on debut a month ago, packed in at the start and darted to the rail in the straight, hindering PELICULA. He afterwards had to be switched from behind runner-up and stablemate, BABYLIKE, close home in the five-furlong round event won by outsider FLY MESSENGER FLY, who had a trouble-free run in an incident-filled race.

When he returned treated with lasix in the Jamboree Sprint at six furlongs on November 13, an alert POWER matched BABYLIKE stride for stride before pulling away with Walker to win by a much-improved four and a quarter-length in 1:14.0, quicker than SLAMMER’s 1:14.2, clocked in the Cash Pot two weeks earlier.

However, Walker has chosen BRINKS, seemingly won over by his margin of victory and Sunday’s 1:14.4 for six furlongs, recorded as ‘easy’ by the clockers, the same morning PERFECT BREW posted 1:14.1 to better SLAMMER’s 1:15.1 in separate workouts.

Though SLAMMER might have gone a full second slower than PERFECT BREW on Sunday, it was a similar situation when they had worked together for the Cash Pot. PERFECT BREW got the better of SLAMMER at exercise. However, on the day when it mattered, far-striding SLAMMER, slowest away, recovered quickly to take the shortest route into the lane and pulled away from his stablemate, who had overhauled PRNCSSHOOTINGSTAR a furlong and a half out.

BRINKS’ 1:07.3 at five and a half furlongs might need improvement to match POWER’s 1:14.0 and SLAMMER’s 1:14.2 for six furlongs. However, it should be noted that they returned as winners when treated with lasix whereas BRINKS won on debut without the raceday medication, which will be administered for the Pick 3 Super Challenge.

The Pick 3 will come down to who stays the trip best, the unknown factor, making the event a tricky affair among seemingly evenly matched colts – SLAMMER, BRINKS and POWER - youngsters who have never gone the distance.

BRINKS faces a helluva race on the lead with speedy PRNCSSHOOTINGSTAR returning treated with lasix and fitted with a tongue tie. However, Walker must have been really impressed by BRINKS’ 1:14.4 workout to have chosen the local-bred over foreign-conceived POWER, who has the best race-performance on his résumé and easily put away PRNCSSHOOTINGSTAR at exercise Monday morning.