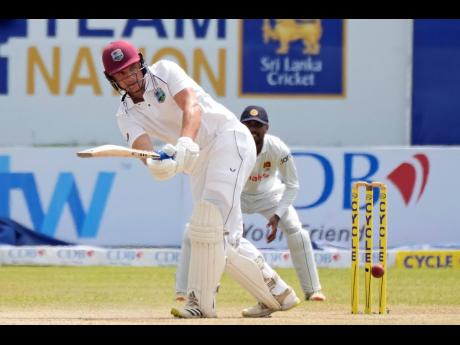 Wicketkeeper-batsman Joshua Da Silva has urged greater fight and application for the second Test starting on Monday, after West Indies’ defeat to Sri Lanka in the opener.

West Indies were bowled out for 160 an hour after lunch on Thursday’s final day after resuming the morning on 52 for six in pursuit of an improbable target of 348, to crash to a 186-run loss at Galle International Stadium.

And with only a short turnaround before the next Test at the same venue, Da Silva said the Caribbean side needed to be up for the contest.

“I just think the boys need to fight. We need to believe in ourselves. Nobody goes out there to fail, everybody is trying their best,” said Da Silva, who struck his third Test half-century on Thursday.

West Indies struggled in both innings, each time failing to negotiate the spin trio of off-spinner Ramesh Mendis and left-arm spinners Lasith Embuldeniya and Praveen Jayawickrama.

Replying to Sri Lanka’s 386, West Indies slumped to 113 for six in their first innings before recovering to reach 230 all out, and conceding a 156-run lead.

In their second innings, they were tottering on 18 for six before being bailed out by Da Silva and Nkrumah Bonner’s 100-run, seventh-wicket stand.

“You can’t really fault the boys – everybody goes out there to do their best,” Da Silva said.

“Nobody gets out on purpose but we played a little bit in front [of our pads] maybe at times – not all the time – but just a bit at times especially in the first innings.

“The second innings was a bit tough. There was a period there Sri Lanka was on top and we just needed to [consolidate] and just fight. That was the key word – fight – and try our best.”

Da Silva made 54 after resuming the morning on 15 while Bonner finished unbeaten on 68, the pair’s partnership frustrating Sri Lanka throughout most of the morning session.

They came together on Wednesday’s fourth evening with the innings in strife at 18 for six, and denied the hosts any further success with a measured stand which provided West Indies some hope of saving the contest.

“When I got into the wicket with Bonner, we had to rebuild, we had to think of how we were going to get ourselves out of the collapse,” Da Silva said.

“So we just wanted to bat balls and be at the wicket at the end of the day because we knew that [on Thursday] we could always take it to another step where we could draw the game or even win the game.

“It was challenging. The pitch was turning a lot and the straighter ball was sliding on a bit so it was a difficult new-ball wicket.

“But once the ball got a bit softer it was a bit easier and we were able to get a little more on top of the bowlers.”

Da Silva said it was important West Indies remained cognisant of the strength Sri Lanka boasted in their own conditions.

“They (Sri Lanka) just played the cricket they know how to play,” he said.

“They used their spinners wisely and they batted in their conditions which they know how to bat very well, so they just used the home advantage to their advantage.”